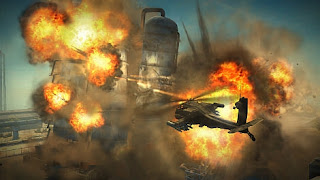 An interesting little trailer has just landed in our inboxes. Developers, Most Wanted, and publisher, bitComposer, has lifted the wrappers on a new Thunder Wolves trailer, and we’re rather looking forward to this one.

As you can see from the trailer, this is a bit of an action-heavy chopper combat sim, filled with pretty explosions and dynamic action set pieces.

We’ve not had a decent chopper game for a while, so we’re quite keen to see how it develops.

The full press release as well:

In Thunder Wolves, the player becomes part of this formidable group of pilots who carry out every order with unequalled precision and speed, no matter whether it requires protecting an oil platform, destroying a chemical factory, or stopping advancing enemies in their tracks.   Their goal is nothing less than saving the world, and this requires staying a step ahead of the terrorists by finding out just what they are planning.
Thunder Wolves is the work of the Hungarian development studio Most Wanted Entertainment, and is being released on Sony PlayStation® Network, Xbox LIVE® Arcade, and Windows PC.
Further information about Thunder Wolves is available at: http://www.mwent.hu/games/thunder-wolves and www.bitcomposer.com.
KEY FEATURES

Get ready for some old-school helicopter action in this relentless, adrenaline-pumping arcade shoot ‘em up.

Choose the right equipment for every job! Nine different helicopters and a wide arsenal of weapons are available.

Carry out a wide variety of missions, from stealth and escort operations to seek and destroy missions.

Spectacular boss battles will stretch your gaming skills to the limit.

Local multiplayer mode tag team! Create a unit with a friend and fly into battle in co-op mode as pilot and gunner.
Share this