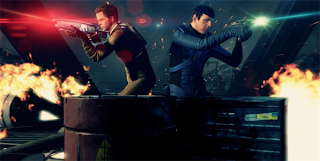 I had hoped against hope that Star Trek would be a great game. Despite being a licensed title, and despite a minimum of hype behind the game I had hoped that what was promised would deliver.

So the game is a cover-based team shooter set in the Star Trek universe? I had visions of a reskinned Mass Effect-style game, and that had me all kinds of excited because as wonderful as the Mass Effect universe is, it just can’t compare with the sheer nerd-cool universe of Klingons and such things. Just as importantly, I had expected that between the combat missions there would be character interaction and the ability to explore the Enterprise. After all, Star Trek itself is not really about action – it’s more true science fiction with the focus being on the characters and the new worlds to explore.

I think that was the idea that the developers might have started out with, too; squint while you’re playing Star Trek and it does look and feel a little like a Mass Effect game. The various game environments have that same epic scope. It might not look as good as, say, Mass Effect 3, but it was constructed with much the same eye for detail. Missions are similarly constructed too, with linear level design hiding some little secrets that offer bits of lore that help flesh the game out. 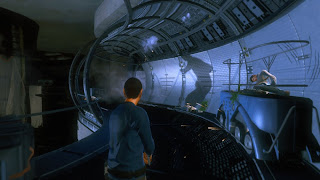 The combat also bears a fair resemblence to Mass Effect. It features a similar weapons structure, cover combat and the tactical nature where players need to look out for their ally as themselves also plays out similarly. Unfortunately though as far as imitations go Star Trek has some brutally painful flaws that make the game nothing short of a crushing disappointment. I still had fun with this, but I’m a very dedicated fan of both Mass Effect and Star Trek. I get the feeling I’m part of a very small group of potential fans of this game.

On the most basic of levels Star Trek is filled with small technical issues that constantly disrupt the flow of the game. From AI that results in enemies sitting in the wide open waiting to be taken down, to jittery animations that constantly remind you that you’re playing a B-grade game, there just is not the precision that you’d expect to find in the games that Star Trek drew inspiration from. Though the variety in what you’ll be doing remains strong from start to finish and the game throws some simple puzzles and stealth sections in the break up the shooting these also suffer from some slight issues marring the experience. It’s difficult to shake the feeling that a more focused experience would have been for the better here.

But more disappointing than these little quirks is how little is done with the Star Trek license. Yes the voice actors for the film are there and yes you get to control the Enterprise in a spectacularly poor space combat sequence. But what you can’t do is get involved in the Star Trek universe. Between missions you’ll find yourself back on the Enterprise but most of the doors are closed and most of the people don’t have anything to say; they just stand around like puppets performing random actions. 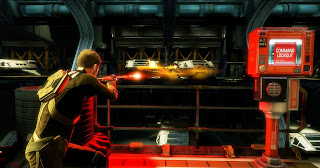 Mission structure is linear too with minimal room to go off the beaten track with sidequests and the like and why, oh why, did the developers put more effort into making the space travel fun? I cannot begin to describe how disappointing it is that this game is more interested in being a generic shooter than a grand space adventure.

The greatest feature of this game is its online co-op. It works well enough, even if the levels are not really designed around the co-op experience. Some puzzles require one player to be in one place while the other does something elsewhere else, but the combat works just as well solo as in teams and aside from throwing some healing back and forth there’s no reason to rely on your buddy. Given this nature of this game I don’t imagine the online community will be active for long, so I suggest that players find others for local play, because though it’s not innovative it really is the best way to experience the game.

Perhaps it was the license that hurt how far the developers could go with this game. But as we’ve seen with the likes of Rocksteady’s Batman games there is no reason that a developer can’t take a license and break it away from the film material in a way that remains appropriate to that film. Star Trek could have been an incredible game. Instead it is a generic buddy shooter. It’s a bit of fun, but that’s all it is, and for this franchise that is unforgivable. This game should have been a 5/5 title.

Ragnarok Odyssey Ace – a trailer and a few new screenshots