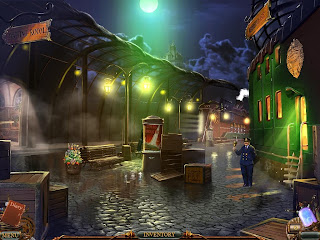 I’ll be honest, up until a couple of months ago, I’ve never really played a hidden object game. Having grown up on adventure titles during LucasArts’ golden years, hidden object games (HOG) always felt like watered down versions of their point-and-click cousins. And that’s why I’m torn on Voodoo Chronicles: The First Sign. While it’s a title that fans of the genre could easily sink their teeth into, it’s held back by some odd design issues that (frankly) make the game look like a simple, cash-in console port.

If you’re playing a HOG for the story, you’re doing yourself a disservice for the most part. Voodoo Chronicles is no different in that regard; you play as Detective Voodoo (…) who is called in to investigate the murder of Mr. Coins (once again, …), a wealthy businessman whose voyage to a lost island has brought a curse back to the city, dooming those who were involved. It’s a paper-thin premise that never really evolves, though it does its job in stringing you along as you hunt for, you guessed it, hidden objects. 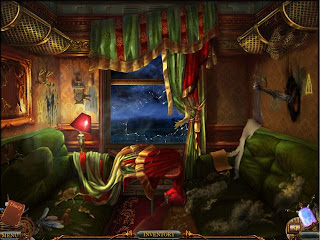 And really, there isn’t too much to say about the gameplay itself. Each new scene presents a list of hidden objects to find, which are marked in the environment by question marks. Collecting all the objects and combining a few items when needed (giving milk to your cat, reloading your revolver), allows you to move onto the next area, where you’ll undoubtedly do the same thing. Puzzles do a decent job of breaking up some of the more monotonous gameplay. The first one for instance tasks you with using rubber bands to connect gears to get a machine working again. They aren’t difficult (or all that satisfying), but they mix up the gameplay, which is welcome in a game of this genre. For the times when you are having trouble with progressing, a hint system allows you to store up hints and use them when needed.

All of that being said, what really ruins Voodoo Chronicles is the presentation. Sure, the story is as flat as can be, but the game itself goes out of its way at times to both aggravate and annoy you. Voice acting is full of overacted, overblown accents, and halfway through the game I simply ended up muting the volume. Similarly, there are some odd word choices when it comes to the hidden objects; apparently, a “beam” refers to a pile of logs (?), and rarely does the voice acting match up with what’s being said on screen. 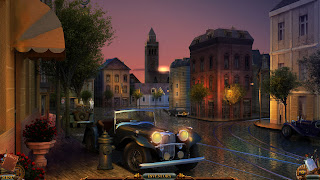 Most egregious is the user interface. Voodoo Chronicles was originally released on the PC back in 2011, and the developers seemed to have put no work into porting it for the PS3. Don’t get me wrong; the game runs fine, but the controls are awful to say the least. Rather than remap menus like the inventory to a simple button press, you’re forced to move a cursor around the screen to enter (and exit), every submenu, including your diary, inventory, and hints. Aside from the X button, every other function is mapped to the analog stick, and with no option to increase sensitivity or cursor speed, it makes the game downright tedious to play. The game does seem to support the Move controller, but I was unable to test out this feature myself.

It’s a shame that Voodoo Chronicles: The First Sign hasn’t done anything to sell me on the hidden object game, at least on consoles. While genre fans might enjoy the game for what it is, they would be better off playing the game on a PC, which the game seems to be tailor-made for. And if you’re a HOG newcomer, you’d be better off skipping this one entirely, lest you ruin the genre for you before you can give it a fighting chance.

Bug Note: While it did not happen during my playthrough of the game, some players have reported that a game-breaking bug exists. If the player skips or exits the game during a specific scene, a critical object in the game will not spawn, forcing players to restart the game entirely. This problem has been acknowledged, and you can read more about it on the the Sony blog.