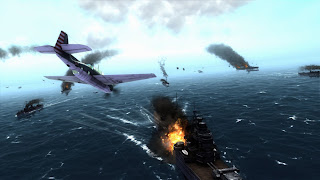 While I’m not a big fan of First Person Shooter genre, I am a big fan of one other kind of military shooter; the kind where you’re in the air. Fighter Flight Simulators are endlessly compelling to me, with the best offering intense dogfights, surprisingly strategic play and of course the soaring feeling of being up amongst the clouds.

Air Conflicts: Pacific Carriers is not the finest example of the genre on the PlayStation 3 (the horrifically underrated Birds of Steel earns that award), but it is a wonderful attempt nonetheless. Using the Pearl Harbour World War 2 setting enables a wealth of historical authenticity and spectacular, dramatic battles, and the game goes to great lengths to capture this drama while offering a mix of arcade and simulation controls to suit players of all levels.

So here’s why I prefer my shooters to take place in the sky; the full 360 degrees of movement opens up skills and strategies that are just not possible on land-based shooters. There’s such a thrill to being able to shake off an enemy sitting on your tail in a dogfight, wheel around and shoot him down with a couple of well-placed bullets. There’s a thrill to executing the perfect dive-bombing run and pulling up and to safety mere feet from the ocean. 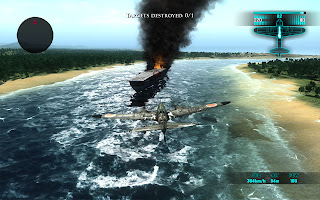 Air Conflicts enables these thrills. With no cover up in the sky it is a pilot’s skill and the ability to take the enemy down before he himself is shot down that is the key to success. It’s a different experience from land-based shooters, and it takes more talent to get right. It’s just a pity that the game is also paced quite poorly. In many missions you’re required to clear out every enemy before the checkpoint is triggered and a new wave of objectives opens up. But, when that last enemy is a small fuel silo that you needs to be bombed, then the entire game slows down and just becomes a series of dive bombs until one sticks.

Worse, there are optional sub-missions which literally involve sitting around watching the sky from a watchtower and trying to identify enemy planes. These missions might be short, but spending three minutes looking at the sky and trying to spot the difference between a bird and a steel bird is three minutes of my life I will never get back. A game like this really should not be getting caught up in mundane process work. That said for the most part the action does keep up at a nice, dramatic pace. 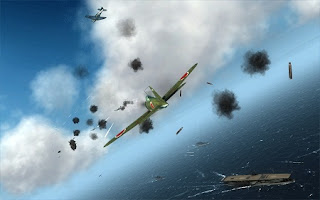 Interestingly Air Conflicts works a “lives” system into the game. Players can switch pilots in the squad via the controller’s “select” button. The current plane that the player was in control of will head back to the carrier to refuel and rearm, meaning it is out of action for a while. Crashing will put a plane permanently out of commission, and losing them all will mean mission failed. In this way the game happily avoids any complications over resource management that other flight sims can suffer with; players essentially have access to unlimited ammunition this time around.

That said there are some incentive to play well as the pilots of each craft are named and earn experience with their kills. That experience doesn’t do a whole lot, but as far as local high-score leaderboards go this is a good way to engage with it. Given the game only features planes and a commander-guy that briefs you before missions, this is a handy way of giving the game some sense of personality too, which is crucial for helping players engage with it. 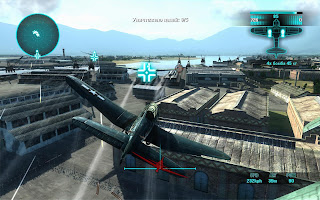 Controls are tight and there’s a nice difficulty curve in mastering them. As with all dogfighting sims you’re not aiming for the enemy plane but rather you’re aiming at where the enemy plane will end up in a few milliseconds. Planes move faster than people, see, and so they won’t be where they were when you pressed the trigger. For new players this can be challenging to get the hang off and the game does offer a marker for where these players should be aiming. Naturally players can expect far less assistance with the higher difficulty settings.

There are three kinds of fighting in Air Conflicts. Dogfighting is, of course, plane-on-plane action. Dive bombing involves getting to a high altitude and then swooping down to take out a ground or water-based enemy. Torpedos are there to take out ships and submarines. Of the three the torpedo conflicts are the most irritating, with an overly-sensitive system for judging the success of each bomb. Many missions will have players doing all three, though, so it would be a good idea to get the hang of them all. 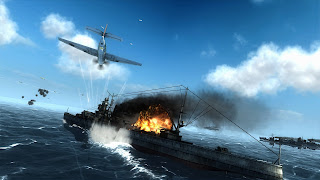 Having played Birds of Steel with its amazing range of planes to fly, it’s a little disappointing that Air Conflicts has so few. Players can customise loadouts to an extent, though most missions require players to go in with specific weapon sets and you’re in trouble if you don’t, but the lack of planes is a real downer when you consider that a big part of the appeal of these games is those planes. You wouldn’t buy a racing game with only ten cars to chose between, would you?

The game also struggles in terms of aesthetics compared to Birds of Steel. That game turned water and the atols of the Pacific Islands into breathtaking vistas. Air Conflicts looks good, but not that good. The music, however, is suitable epic.

So I’m not going to recommend this game over Birds of Steel for people who are on the lookout for one single Combat Flight Sim. But, for people who have that game and are looking for more? This is an interesting second take on the same battles of the same time period.