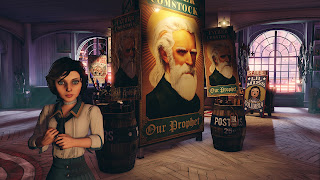 The first Bioshock was a huge hit when it released to excellent sales and reviews. The world of Rapture was wonderfully realised, the city beneath the water a dark, often creepy affair that managed to blend an interesting story with excellent gameplay mechanics, making it stand out from many of the other FPS games on the market at the time. Bioshock 2 felt like more of the same – generally regarded as almost more of an expansion to the original than a new direction for the franchise.

Bioshock rightfully earned its fans, but Bioshock Infinite promised to take the series in a new direction. The teasers were intriguing but this only served to ramp up the game’s already incredible expectations. That is of course the purpose of teasers and trailers, but as games like Mass Effect 3 demonstrated, a perfectly good game can still be seen as a failure in the eyes of fans due to expectations being too high. The delays in release gave fans some concern, but the good news is that Bioshock Infinite delivers on almost every front as yet another breath of fresh air for the FPS genre. 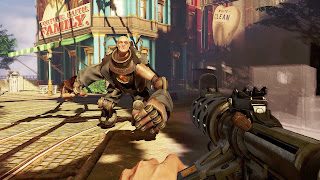 The combat mechanics are as good as ever, functioning mostly as a game with guns, but including different powers along the way that help keep the combat interesting. You can buy upgrades for your powers as well as specific types of weapons, giving you a reason to collect money as you manage your ammo supply and your ability to upgrade effectively. There is also a new skyline mechanic that plays into both combat and travel, and while it can be a bit confusing at times to orient where you are going, there is no denying that it is a rush during some of the combat scenes.

It is also worth noting your companion’s place during combat. Elizabeth offers a bit of additional strategy to the game as she can temporarily bring in objects to your world. These can range from different weapons, to cover to hooks you can grapple up to for a different vantage point. She never gets in your way physically, and never becomes a liability. When I first heard the premise of Bioshock Infinite, I at least briefly paused and shuddered. The game sounded like the story essentially revolved around one giant escort quest. For anyone who has suffered through shoddy escort quests in the past (I am looking at you, Dragon’s Dogma and World of Warcraft), you know they are often the worst kinds of quests you can undertake. Luckily, none of that was a warranted concern because Elizabeth stays completely out of harm’s way – and in fact she is very helpful to you as she tosses you boons such as ammunition and health during heated combat. 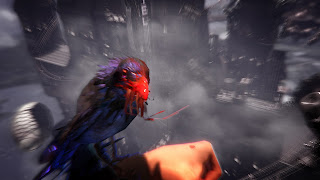 The skyline system helps to touch on a very important part of what made Bioshock so interesting to me, and that is the world of Columbia feels very different than Rapture’s from the first game. Having so skillfully created the claustrophobic, dark and lifeless world of Rapture the first time around, I questioned if Irrational Games would be able to convey this new world convincingly. Here instead of leaky windows looking out into murky waters, you get blue skies, floating segments of city and an actual population. You are not always shooting people – sometimes you are interacting with them. This is especially true early on.

The presentation values in Bioshock Infinite are excellent. Visually, the art direction and animation are very impressive. Gain a high vantage point and look out over Columbia, and you are bound to be impressed with the scope of it all. Some of the detail and textures could be better at close range, but the vibrant use of color and open atmosphere bring Columbia to life in a way that Rapture never possessed. It is an impressive accomplishment for the development team.

The music compliments the game’s pace perfectly, quite and subtle during moments of exploration and conversation, but rising to meet some of the more frantic combat moments as well. There are also some familiar songs remastered to sound completely different here, that help Columbia feel like a world that could exist. The sound effects benefit from the varied combat as well, giving you appropriate crackles and blasts from your powers – which goes a long way toward breaking up the monotony that games reliant on gunfire can fall into. However, the real standout is the voice acting, which is present all over the place and really helps to sell the excellent story. Elizabeth in particular resonated with me very well, especially when she was interacting with my protagonist, Booker. 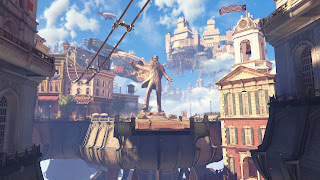 Speaking of the story, I will not go into too much detail here except to say it is both interesting in topic while also being very well executed – especially the complex ending. It was interesting to me that my son actually was not as much of a fan of the combat mechanics as he was in the original Bioshock, but he still continued to play through because he said he thought the story was awesome. I think the story largely succeeds because the team at Irrational Games made me care about Elizabeth’s plight, and I genuinely wanted to see to her well-being. She goes through a great deal throughout the story, and you see her changing and growing as a character, keeping you invested throughout.

That being said, there are some themes that may rub some people the wrong way. Bioshock Infinite touches on racism and religion in a way that might be uncomfortable for some. Even the protagonist has a fairly dark history tucked into apparent addictions. The game is also incredibly violent. This is hardly a new thing for the FPS genre – after all, you are taking a first person perspective while shooting people, hence the name. Still, the use of the skyhook for melee creates some pretty intense and violent scenes as you dig your rotating blade into someone’s neck or slash at their faces. 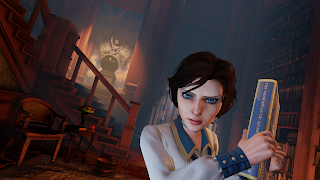 I also ran into some odd behavior a couple of times. Once I ‘fell’ through a building, and was repeatedly falling from top to bottom, just outside of the framework of the building during a particularly heated battle. At another point, I basically died the moment Elizabeth healed me, all while I killed off the last guy in that particular scene. The story would not continue, as if it could not load the next bit of content as it was trying to decide if I should have died or not. In both instances I was able to reload to a prior checkpoint, but lost a bit of progress time in the process. Speaking of time, the game itself is not terribly long. I was able to beat Bioshock Infinite in about fourteen hours, and other than trying out the harder levels of difficulty, there really was not much of a reason for me to go back and play again (unless you want to look for clues to the game’s ending earlier on).

Overall, Bioshock Infinite is a success. If you are okay with some of the themes and violence, you will find yourself immersed in a beautifully realized world, engaging storyline while also playing a well-crafted shooter. It is impressive that the developers were able to make Infinite familiar to fans of the original game, while making it stand alone on its own merits as well. This all adds up to make Bioshock Infinite an easy game to recommend that others play at least once.