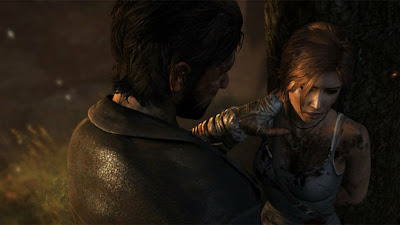 The games industry has struggled to create true horror games. Part of the issue has been technical – genuine horror relies on players being able to relate to what’s going on, and blocky or pixelated representations of people are difficult to relate to. Another part of the issue has been the performances – genuine horror needs great performances to build the atmosphere and fear. And a third part of the issue is even simpler – jump scares are easier to pull off, but are hardly the kind of memorable fear that makes for a memorable horror experience. It takes the work of a true genius to create true horror, and the team behind the Tomb Raider game are true geniuses.

If you look outside of the games industry, the finest examples of horror have always been those that don’t shock people with cheap thrills, but rather create an atmosphere of isolation and ignorance, and then throw in malignant force that threatens the protagonist’s life (or worse). It’s not the evil itself that causes the horror – evil exists in plenty of films, books and games that aren’t horror at all. It’s the atmosphere that creates the horror. As viewers, what we don’t know frightens us more than what we see in front of us, and as social creatures, we easily relate to the fear of being truly alone.The very best horror books and films are able to portray this isolation and ignorance in a way that the audience empathises with the lead character, and so feels isolated and ignorant themselves.

If you want to see a perfect example of this in action, consider H.P Lovecraft’s horror stories. A hundred years on and he is still the perfect example of genuine horror. Despite writing monster tales, readers never see the monsters in his tales. The protagonist of each story takes one look at the creature and is so overwhelmed by its power, its alien form and its evil that they’re driven insane. Not knowing what that creature is, is chilling. We, the audience, are left without answers. We’re left ignorant, and it’s a case of not knowing being infinitly more effective than knowing. Knowing would turn Lovecraft’s creatures into Godzilla-like monsters; funny rather than frightening.

The finest horror films all do a remarkable job of isolating the protagonist. Consider the original Blair Witch Project or Paranormal Activity – two of the finest horror films in recent memory. We never see the Witch, and the most we ever see of the ghosts is some funky special effects to create footprints in dust, and yet the atmosphere of fear in both is palpable. It’s Lovecraft’s philosophy put into practice; when you can’t see the creature stalking you you have no idea how much stronger it is than you.

But that’s not to say that horror has to have an invisible protagonist to be effective in building a fear within ignorance and isolation. Consider the likes of the original Saw or Hostel. These films are hyper-violent, but it’s not the violence that makes them effective horror films. Again, violence is in plenty of action films, and no one would consider something like The Avengers as a horror film. No, the violence in horror films is almost a case of bait-and-switch; people come for the violence but where the fear comes from is the isolation. In Saw, the protagonists are locked, alone, in a room that wants them to kill one another. In Hostel, the protagonists are trapped in the middle of nowhere, and in Eastern Europe, far from their homelands. It’s that isolation, the desperation to escape and the inability to do so where the film’s tension – and thus horror – is built.

What does this have to do with Tomb Raider? The reboot offers the same features that made these films legitimate horror classics, and manages to be the most effective horror game ever made – possibly without even being considered a horror game. I see more people writing about it as though it’s an Uncharted clone, but I think that’s doing the game a disservice. Nathan Drake never had to deal with the extremes Lara does.

For a horror game to succeed the most critical component first is that we care about the character. It’s hard not to care about this game’s version of Lara Croft, who manages to strike the perfect balance between vulnerable and brave for people to become invested in her character. Her vulnerability is constantly reinforced to us – she can’t do a hero-style dive roll; in just about every cut scene some part of her is torn or pierced, and yet she continues to struggle on, with a solid sense of responsibility for her allies and friends. She’s a hero, and not even a reluctant one; she’s just not an especially good at being one.

Because we care so much about Lara, the environment she is in and what happens to her has an immensely greater impact than if we were in control of a killing machine or an unlikable fool. This is where the game’s goreporn theme is absolutely critical, and it’s why the game deserves to be considered a horror game. It’s in part the setting which is often more horrific and better able to isolate Lara from any concept of help than anything we have seen in recent Silent Hill or Resident Evil games, it must be said. It’s in part the monsters as there’s a sense through much of the game that there’s a Lovecraftian/ Blair Witch-style supernatural evil dwarfing the immediate threat presented by the human soldiers. So check and check, there is isolation and ignorance present in the game to build an atmosphere of horror.

As a player, the impact from seeing Lara impaled on a rusted nail within this context is massive. It’s enhanced by the knowledge that she is alone and out-gunned. The dirt, scars and blood she accumulates on her body tells a story of horror all in itself. At every opportunity the game relishes the harm it can do to this character. It’s extreme and a brutal contrast to the amount of energy the game also puts into making us care about this character.

The lack of jump scares means, I suspect, that the broad gaming community will not consider this game to be a horror game. But that’s like saying The Exorcist isn’t a horror film because it doesn’t star Jason Voorhees (now there’s a crossover that would be interesting…). The intensity of the violence done to Lara Craft, the palpable fear in the game’s very setting, and the relish in which the game exposes players to its mean streak puts Tomb Raider right up there with the likes of The Hills Have Eyes, Hostel and The Blair Witch Project as a brutally effective and subtly intelligent work of horror. More importantly, it’s a sign that the games industry is understanding that horror can be more than loud bangs and ugly monsters crashing through windows.