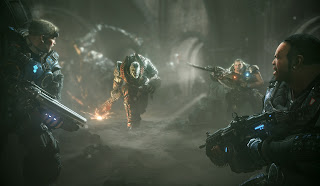 Confession time! This is my first Gears game. I like Japanese games, and it’s really hard to think of a game more alien to the Japanese design sensibilities than this one. This series has always struck me as utterly macho as only American aesthetics can allow and about as elegant as as the dodo bird. I’ve never been a fan of linear shoot-em-ups, and so this one more than most has simply not appealed to me.

So I didn’t really know what I was getting in for with this game beyond what I’d read of the series, its glowing praise in the press and the community and a vague understanding that it was a cover shooter. 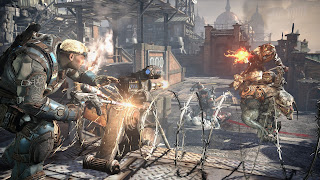 I wasn’t disappointed. If the other Gears of War games are up to this one’s standards then I can understand its hype. But by the same token the game only lived up to my expectations. I figured it would be was a high-action, linear and macho shooter, and that’s what I got.

This is what people like me talk about when we describe the rot that is infesting the game’s industry; the samey experiences that are high energy and generally enjoyable but achieve this at the expense of doing anything exciting or interesting. Gears of War Judgement might well be one of the finest shooters that we’ve seen this generation and I can hardly fault its fan base for, well, existing, but I really can’t understand why these are the only games that people seem capable of enjoying en masse any longer.

But in fairness to Gears of War Judgement, let’s look at this game on its own merits. Here’s what I did enjoy about it that puts it above average for the genre; it has energy and it has a modicum of smarts about it. The scale of the encounters in this game, right from the outset, is epic. Dozens of enemies appear from all angles and levels are intricately designed to allow for multiple vantage points and because the A.I of your teammates is so solid there are multiple possible paths through each encounter. 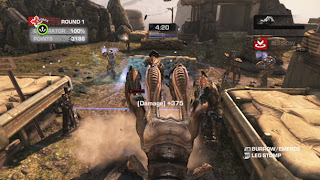 There are moments where Judgement quite cleverly crosses over into some other genres; the occasional tower defense element especially made me happy. A little counter appears on the screen giving me a small amount of time to prepare for a wave of enemies that I just know is going to be massive and more than capable of outgunning my paltry squad. To even the odds there are some resources that I’ll have at my disposal – turret guns and the like – and so there’s an element of very basic involved in working the battlefield to my benefit. The anticipation and then intensity of these combats are a thrill above and beyond what most shooters can offer, and to Gears of War’s credit this is one of those rare shooters where I found myself losing time as I kept exploring around “just one more corner” – I actually looked forward to the next encounter.

Though the maps are linear and small in scale (usually there’s only one or two encounters before a section of the chapter is completed and you’re taken to a “section complete” breakdown of your performance, the game does work to give you at least the impression of choice. As mentioned before players can generally tackle encounters in a multiple of different ways, and before each mission players also have the option to turn on an additional challenge if they’re feeling confident to earn greater rewards. Ultimately there’s not reason to avoid the extra challenge as the game isn’t really easy without it and this is a game that will only ever appeal to more experienced gamers, but the illusion of choice is a nice bonus. 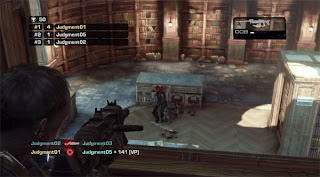 As I expected from the Gears of War franchise two things really stick out about the combat – the cover system is really, really good, and the weapons feel great to use. The skirmishes are a delight for the senses, with gunfire coming from all angles amongst a backdrop of orange skies and fires – this game does a spectacular job of setting up a warzone.

It’s just as well that the game does such a great job of engaging with the primitive part of my brain that says to itself “aw pretty explosions” as I had no idea what was going on with the plot. On a very basic level I understood that I was killing monsters in a warzone, but the greater nuances of the characters, their relationship to one another, and a lot of context regarding the war itself were lost in me. I was surprised that I found it so difficult to get into the story given that the plots to these games seem reasonably thin but there’s some definite assumptions being made that people playing Judgement have played the previous Gears of Wars games. Given the success of that franchise it’s probably not unfair to make that assumption, but I would be remiss if I didn’t warn the newbies that if they’re looking for a story to follow this one might not sit well. 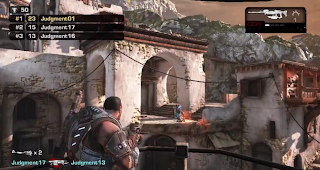 It’s good to see a shooter that makes good use of multiplayer too to enhance the game, rather than just stick it in because because the devs need to put a stop to second hand sales. I didn’t get to spend much time with the Gears multiplayer mode, but everything seems well crafted and full-featured. Compared to a game where it just felt cheap and cynical (see: Tomb Raider), Gears of War essentially gets to be the first major multiplayer release for the year alongside Crysis 3, and I certainly enjoyed this one more. That said, it is equally good to see a shooter provide a single player game that offers more depth than a few hours. Gears of War is perfectly worth its purchase cost even if you can’t be bothered looking for online buddies. The addition of unlockable post-game content in Aftermath is a great bonus in fleshing out the game world for fans, I assume. Again, the value of that extra chapter is somewhat lost on a guy who hasn’t played the previous games.

I don’t think that Gears of War does anything that we haven’t really seen in shooters in the past, but because it does do it so well and with such intensity, it still manages to be a rollarcoaster of a ride. As much as I found the story painfully generic (and the voice acting surprisingly weak for an AAA-game), as I said at the start of this review, while these kinds of games really don’t sit within my area of expertise, but I’m glad I played this one; it was fun.