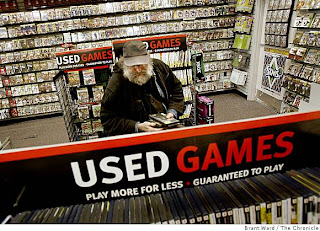 One of the most persistent rumours regarding both Sony and Microsoft’s upcoming next-gen hardware is that both will actively block the use of second hand games.

Predictably this is ruffling feathers. I’ve seen a wide range of “I would never buy such a console, how dare Sony/ Microsoft tell me I can or cannot buy second hand games” responses on forums and the like.

On a purely emotional level I understand this reaction. I, too, have found the odd gem hidden away in the second hand section of game shops. I’ve also occasionally taken advantage of the ability to trade in games so that I can subsidise the cost of the newest and greatest. Were I to lose that ability I would feel deflated (and I would quickly end up with a pile of games that I didn’t care for).

But the simple reality is that the second hand games market is a problem, and Sony and Microsoft would be wise to stamp it out. Long term, it would ultimately benefit us as gamers, too.

Contrary to popular opinion, the reason that publishers and developers hate the second hand business so it not because they want to stop consumers from playing their games, and it’s not even the fact that they don’t make any money out of the transaction of the sale of a second hand game. The problem is that retailers are able to sell second hand games at a cheaper price than a new game. It means that within a single shop a publisher needs to compete with itself to sell a game to a consumer.

Given that the margin is higher for a retailer with a second hand game, the retailer is always encouraging consumers to buy second hand. In Australia, EB Games’ rewards program gives players one ‘point’ per dollar for buying a new game, and two ‘points’ for buying used. So not only will the consumer get the used game cheaper, they’ll get more back for it too.

This leads to a cannibalisation of the market by itself. Game publishers are forced to drop prices far too quickly for what should be a fairly lengthy shelf life for a fairly expensive product to produce. Unless it’s an AAA-game by a major studio, it’s not uncommon to see new games discounted within a week. And that’s because it takes about a week for cheaper second hand games to appear on the shelves. Publishers ultimately need to wear those discounts as a loss of margin, and the second hand sales replacing the new game sales as a loss of market demand.

To try and combat this publishers and developers introduced online passes and DLC. This becomes a case of what sales calls a “value add.” If you buy the game new, you get to play it online and you might even get some bonus costumes and the like for your characters. If you buy it used you’re going to have to shell out some money directly to the publisher to gain the same features. Because the cost of a second hand game + the online pass would often cost more than the new game, consumers predictably reacted badly to being “gouged,” when really the publishers were simply protecting their own competitive position.

And as a result there’s bad blood between retailer, consumer and publisher. They’re not the enemy, but publishers are forced to become ever more aggressive with these monetisation strategies to see enough profit to continue to operate and grow. Consumers meanwhile are becoming ever more irritated at the publisher, and retailers are finding it harder to preserve their own margins.

This is why the removal of the second hand market would benefit everyone in the longer term. If two thirds of the next generation of hardware was to block out second hand sales, and if consumers were forced to pay for new games, the publishers would enjoy a healthier bottom line, and greater revenue security. That money would be reinvested into its developer partners, so hopefully there would be fewer instances of developers being shut after making their first mistake. There would be a greater range of new IP developed, because there would be more money for R & D. Ultimately that benefits the consumer.

Yes there would be some customers that Sony and Microsoft would lose, but I suspect it won’t be as many as some circles are trying to claim. And I’ve long been an advocate of the games industry being smaller, but operating on healthier margins. Everyone would win.

The weekly discussion: Your dream game?