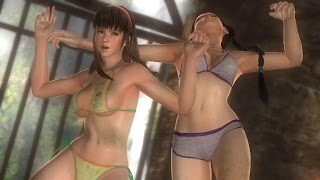 At a time where developers are being closed for just one failed game, and mid-tier publishers like THQ are shutting down for any number of economic reasons, one mid-to-large publisher, Tecmo Koei, is showing everyone how it’s done.

That’s right. Nearly 300 per cent profit increase. And most interestingly? That profit didn’t come from either mobile or online gaming, which is the direction every other publisher seems to be pointing at the moment. Tecmo Koei’s online and mobile division actually reported a 10 per cent drop in sales to ¥3.8 billion ($40.8m/£25.9m).

I suspect the reason for that was the company didn’t bother releasing an iPhone or iPad game in that three month period in 2012. When you’re selling bucketloads of console games, you probably don’t need to, either.

So we’ll celebrate this good news with a lovely picture of Hitomi. Actually, I’m really not surprised Tecmo Koei had a good quarter. Not when Dead or Alive 5 was out there with DLC and stuff.

The PlayStation 4; don’t be surprised if it is “free” at launch

Looking back at Resident Evil 6: was it that bad?