The latest game (and first real spinoff) in the famed tactical espionage series from Konami stars cyber-ninja Raiden and focuses on more action than sneaking. But one thing that the title will definitely have in common (on the PS3 anyway) with older Metal Gear games are the Virtual Reality missions.

Konami has just announced that a set of the training missions will indeed be making its way to the PlayStation 3 version of Rising. The missions will allow players to run through levels not seen in the main game and “hone their skills” in combat, tactics, and stealth (okay I guess there is some sneaking in there). The company promises that fans of the Metal Gear Solid 2 and Metal Gear: The VR Missions versions of the levels will feel right at home here. 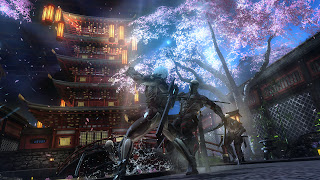 Oh, and a little something extra for you- you’ll be able to control a Metal Gear Dwarf Gekko in the VR Missions. Love ’em or hate ’em, that’s pretty neat.

The extra mode is exclusive to the PS3 version of the game (for now anyway) but you can expect to see Metal Gear Rising Revengeance slice into both the PS3 and the Xbox 360 on the 19th of this month in the US.