With the recent release of Fire Emblem Awakening, a lot of players are really getting their first serious look at this RPG-strategy series. There are around a dozen Fire Emblem games with the series’ first release way back in 1990, though many of those were released only in Japan. My first brush with the series was not until the Wii release, Fire Emblem: Radiant Dawn.

However, my first real experience with a deep RPG-strategy game may have been the little known title, Warsong, by Treco.

With all of the attention Fire Emblem Awakening is getting (and with good reason – we really enjoyed it here at Digitally Downloaded. You can read Clark’s review here, or my second opinion piece here), I thought it would be a good time to take a look back at what I believe is arguably the best RPG-strategy game most people have never played.

Shining Force was a very popular tactical RPG when it came out as well. Its earliest iteration was on the Sega Mega Drive/Genesis back in 1992. Heroes of Might and Magic: A Strategic Quest came out in 1995. Why am I listing all of these dates? Because Warsong beat all of those better remembered titles to the punch, but may have put down a lot of the groundwork used by them down the road.

Warsong released for the Sega Genesis/Mega Drive back in April of 1991. I do not know what the earliest strategy-RPG game was – it may have been Warsong, but there could be others I have not seen myself. Warsong was definitely my introduction to this genre. 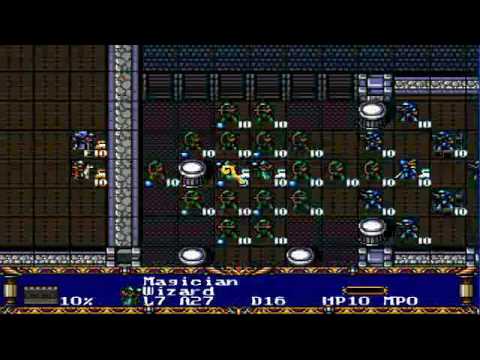 This gem of a game came out for the Sega Genesis (and was called Langrisser overseas). I am not sure what inspired me to pick it up at the time. I had heard nothing about this game in any of the magazines I read, none of my friends had played it, but something about it caught my eye when I was mulling what game to purchase next.

Something about the back of that box must have sparked my interest, because I took the game home, put it and and began to play.

I immediately loved the game’s art style. The graphics had a colorful, anime feel to them when showing character portraits. The actual battles that took place were actually pretty active as soldiers kill each other off, with a left side versus right side that would be seen in later games like Dragon Force for the Sega Saturn. The backdrops and map designs were actually pretty well detailed for the time.

The sound and music get the job done. There was nothing terribly memorable about either, but this was a game that was more about the tactics and back then I had my stereo on as often as my video game sound turned up. It would have been nice to have a bit more variety in the music, but I don’t recall it ever particularly bothering me either.

So how did the game play? Well, there were two aspects to it. There are the leader characters, and they are the most important.  Hints of Fire Emblem here, as when a leader dies, he or she is gone for good.  I recall saving often to prevent that from happening because one small mistake could cost you hours of work building said leader up. The difficulty curve later in the game ramped up quickly as well – again a trait found in the Fire Emblem series. 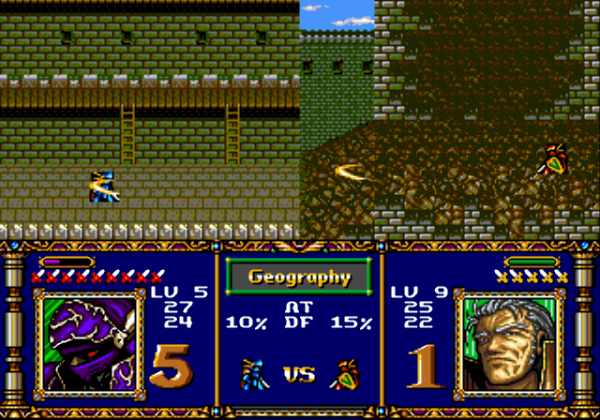 Shades of Dragon Force show up again, as each of these main characters had soldiers units they could control. Each character has a range or aura of influence and if their soldier units fight within that range, they got bonuses to their stats. Each leader can hire different kinds of soldiers at the start of each level, and there is a sort of rock/paper/scissors mechanic to which soldier units perform best against one another – something else present in how Fire Emblem handles the damage and defense of certain units.

There are other factors as well, such as terrain and if your leader characters have any gear equipped (at the start of each level, a scenario is given to you and you have a chance to spend your hard earned gold on different kinds and quantities of soldiers, and that is also when you can choose to put a piece of equipment on a leader character). I recall getting so good at the game that I could go through the first couple of levels or so without buying any soldier units, to conserve money for when I would need it more in subsequent levels.

When a leader character dies (the enemy units are made up of these as well), their support soldiers will perish as well. This was an important strategic consideration because that was often the quick and easy way to win a level, but at the expense of gaining more experience by killing his soldier units first.  Some levels also have assorted neutral characters who will go after anyone who gets to o close. Some missions are designed for certain types of soldiers as well – for example one of your heroes can hire mermen and they are almost essential for water combat – but they are almost useless in levels without water to cross.

The game is made up of twenty levels, which may not sound like much but each stage can take quite some time to get through. Thankfully the option to save during the middle of a map was available – something earlier games like Ogre Battle lacked on consoles. This meant you did not have to set aside two hours to play through a map – and as mentioned before, it gave me a chance to have a fallback in case my tactics got a leader killed. 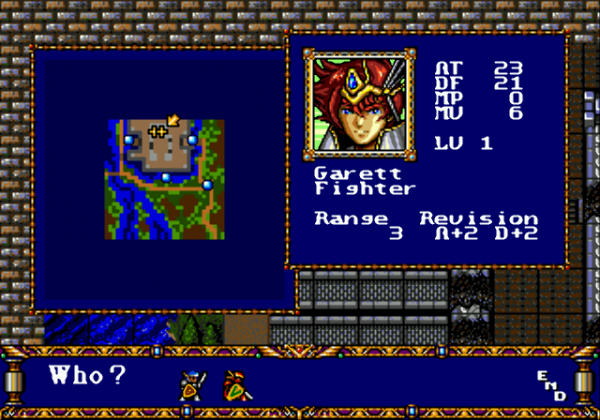 The menu and controls are very simple to navigate and while it is easy to learn – there is are so many different tactics and unit strategies to apply that there is perfectly valid reason to come back and play again once you beat the game.

The story itself is nothing new – good guys are put on the run by attacking bad guys. Good guys regroup after getting smacked around a bit in the first level and they rally a force to defeat not only the known bad guys, but the greater evil pulling the strings behind the scenes. It is all really well presented though, with story pieces between levels and dialog scenes from characters on maps.  While you have no options to change the storyline itself, it was actually one that I found interesting enough to play through several times. 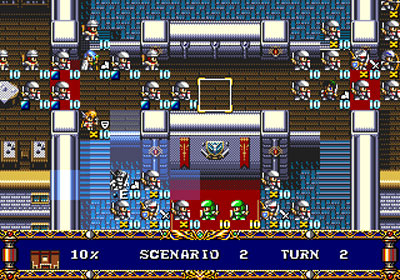 The RPG elements come in the form of gold, equipment, experience and levels. In fact, this game was the inspiration to a leveling system I implemented on my MUD over a decade ago that I called a Tier system. Your characters start off a specific class, level up to a point, and then choose one of two. Now this sort of system is fairly common – and again found in titles like Fire Emblem, but at the time it was fairly novel.  Some characters were so similar that their later tiers became the same thing, like Magic Knight, but there were unique ones too. For example your lead character Garrett could become a King class, and no one else had access to that particular one. Each tier brings new skills and powerful stat boosts and adds a good deal of replay value to the mix.

And replay I did. I can recall beating this game at least three times – maybe more. I was not the only one fascinated by the game, as itt was a hit among my friends who initially asked: Warsong?  What’s that? 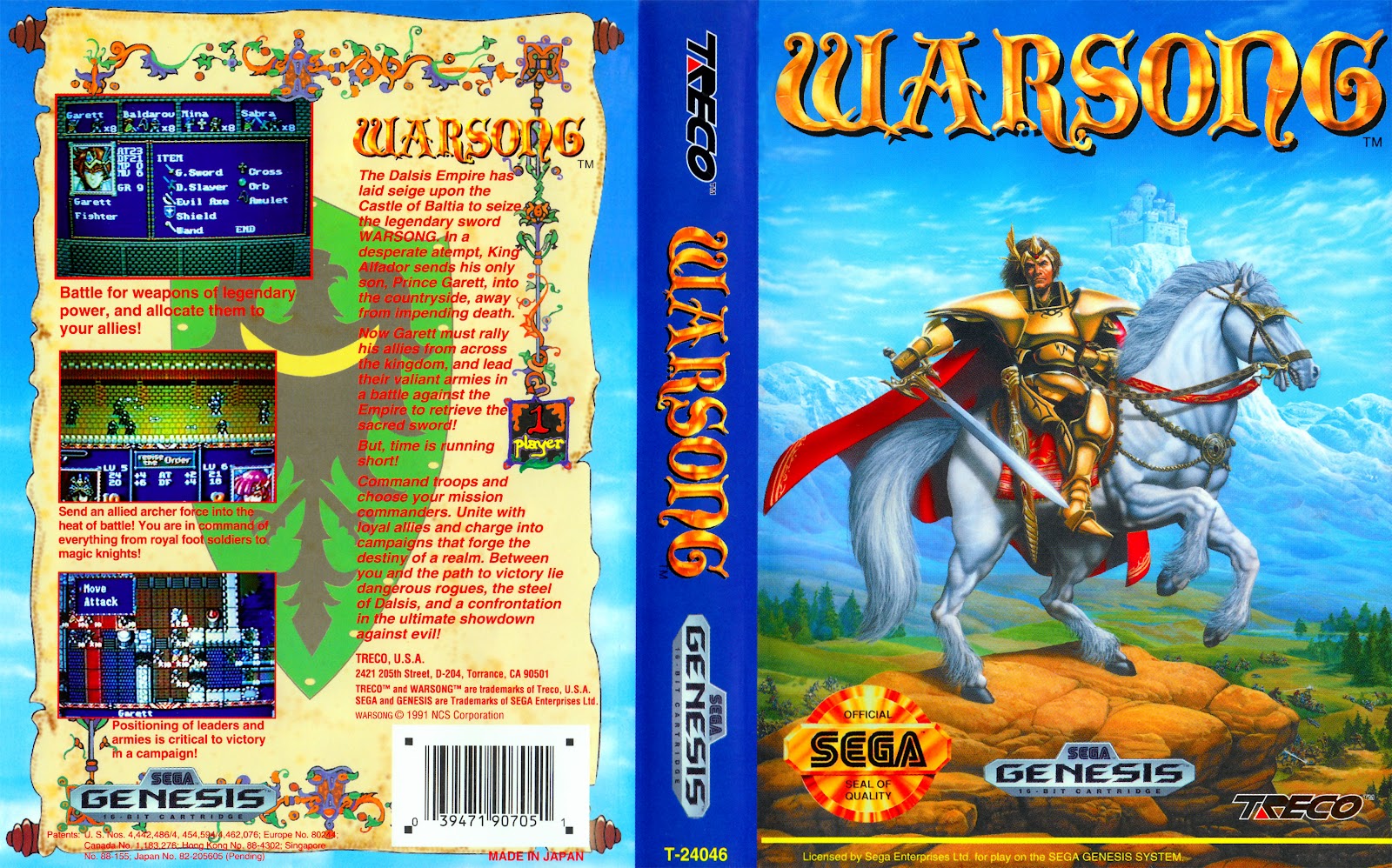 However, these were the same friends I had gotten hooked on strategy games on the NES years before too (Nobunaga’s Ambition, Bandit Kings of Ancient China and Romance of the Three Kingdoms to name a few) – so they gave it a shot and not a single one disliked it.  Most of them borrowed it long enough to beat the game once if not twice. One other friend borrowed my copy for a day and a half. I was a bit surprised when he handed it back to me and said I could have it back. I asked if he had disliked it, but it turned out he simply went out and bought his own copy after playing mine for a bit. He also looked as though he had not slept since borrowing it.

To this day, this ranks as one of my favorite all-time video games and Warsong has directly influenced my opinion on what a strategy game could be. It also had clear effects on my own game design years later for my MUD, Kingdoms of the Lost. I played Warsong again recently and feel that it holds up pretty well today still. Sure, the production values do not hold up well, but they were never the focal point of the game back then either. If I bring it up in conversation with most gamers though, none seem to have ever heard of, let alone played this challenging and under-appreciated classic.

Atelier Totori – Looks like it will receive a global release