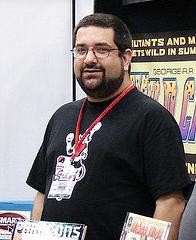 Time for a brief history lesson: Before video game RPGs even existed – indeed before video games existed in mainstream culture – there were Pen & Paper (or tabletop) RPGs. Games such as Dungeons & Dragons and GURPS got people together to engage the imagination, slaughter some orcs and demons and drink some beer.

The formula was so successful that video game developers attempted to emulate it. As primitive as the first Final Fantasy games were, and as basic as Nethack was, these games were earnest attempts at capturing the spirit of the Pen & Paper RPG.

Green Ronin Founder, Chris Pramas, is head of the company behind the Dragon Age Pen & Paper RPG. One of the better video game RPGs in recent years (at least, Origins was), Dragon Age has translated remarkably well into the world of Pen & Paper gaming. Pramas took the time out to have a chat with us about the game, as well as Green Ronin’s plans for the future.

Digitally Downloaded (DD): What are Green Ronin’s goals for the next 12 months with the Dragon Age RPG?
Chris Pramas (CP): Our first goal is to release Set 3, which completes the core game by providing rules for characters level 11-20. After that, we want to catch up to where BioWare is at with Thedas. Our game was initially built around playing through the Fifth Blight, but there’s a lot more to the setting after Dragon Age II, the novels, comics, etc. We want to get more of that material into the RPG. Playing out the Blight is a great campaign, but there are many other stories to tell in Thedas.

DD: What was the attraction of the Dragon Age license for a pen-and-paper RPG project?
CP: It’s not every day that BioWare calls you up and says, “Hey, want to make a pen & paper RPG based on our new fantasy game?” As a big fan of Baldur’s Gate and Knights of the Old Republic, that was pretty much all I needed to hear. Also, I had been looking for a good way to create an intro game that might introduce new people to tabletop play. Dragon Age was perfect, as we could recruit video gamers who already understood the world but had not necessarily been exposed to our kind of gaming.

DD: Early RPGs were inspired by pen-and-paper games such as Dungeons & Dragons. Now the cycle seems to have come full circle. What influence did the videogame RPGs have on the Dragon Age RPG?
CP: In the case of Dragon Age, it was mostly the setting, but we did try to mirror some of the abilities, spells, and such. We wanted it to feel like Dragon Age, but not use the video game’s mechanics, as I thought the tabletop game should be simpler. Generally speaking, I think tabletop games and video games should concentrate on the things they are each best at. I don’t think it’s fruitful to try to emulate video game mechanics in tabletop games.

DD: Are there incompatibilities between pen-and-paper RPGs and video games? What features of the Dragon Age games just could not cross over into the RPG?
CP: I don’t know that I’d call them incompatibilities but there are things in one type of game that don’t necessarily work in the other. Tabletop RPGs and video game RPGs are cousins, but not siblings, if you know what I mean. So Origins had that whole system of giving gifts to your companions to gain their favor. There’s nothing like that in our game, because that sort of thing is just handled with roleplaying.

DD: What role did Bioware play in developing the system for the Dragon Age RPG?
CP: They were hands off about the system. Their major concern was that the game felt right and represented Thedas accurately. Another thing to bear in mind is that I actually hadn’t played Dragon Age: Origins when I designed the RPG! I was working off of BioWare’s world and design documents but I didn’t actually play the game until we were in production.

DD: Have there been opportunities to break from the Dragon Age tradition, or even feed ideas back into the development of future Dragon Age RPGs?
CP: In some minor ways. For example, a mage in our game can use a wand or a staff to shoot an arcane lance, whereas the video game only features staves. Set 3 is introducing pole arms, which haven’t been in the video games. Nothing earthshaking though.

DD: Your catalogue also includes Song of Fire & Ice and DC licensed games. Is there ever a concern that these games will struggle to meet the expectations of fans? Why target licensed products?
CP: Well, sure, that’s always a concern when you do a licensed game. There’s a reason we don’t have one house system, like some companies do. We want the right system for the setting. Thus A Song of Ice and Fire Roleplaying and Dragon Age have completely different game systems, though both are fantasy games. In Ice and Fire, houses and politics are important part of the setting, so our game has a whole system to create the noble house that is the focus of the campaign. Players thus have individual goals but also group goals as their house engages in the game of thrones. Very different feel than Grey Wardens fighting a Blight.

As for licensing, it’s a great way to reach new fans. Also, we’re all lifelong nerds here, so it’s awesome to get to work with these properties.

DD: Are there other licenses that you are considering? Could we see an Elder Scrolls or The Witcher RPG in the near future?
CP: Not at the moment. We’re handling three right now and that’s plenty of work. We’re currently working on creating a fantasy setting of our own though. It’ll be featured in the next game built using the Adventure Game Engine (the system that powers Dragon Age). We’ll be announcing that game later this year.

DD: Finally, what video games are you currently playing?
CP: I have had a pretty light year of video gaming so far. I’ve mostly been noodling on my iPad with games like Ticket to Ride, Ascension, and Small World. The last X-Box game I played seriously was Dragon Age II. It was my fourth play through!

The Mirror of Fate demo reflects on the eShop

Divinity: Dragon Commander brings on the dragons with jetpacks