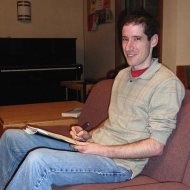 The collectible card game (CCG) genre is not an easy one to develop. First you need to come up with a killer, original concept, and then you need to build dozens – or preferably hundreds – of individual cards and rules that come together to build a balanced game.

Then you need to give people a reason to play the game in the first place, and then another reason for them to keep coming back for more. And then you’ll need to find a way to earn some money from them.

None of this has stopped Jeff Pickhardt from trying. He’s developed his own CCG, Orbs CCG (http://orbsccg.com/). He also took the time out to sit down and have a chat with me about his vision for the game, and what’s next for Orbs.

Digitally Downloaded (DD): Could you tell us the story behind Orbs CCG? What inspired you to develop it?
Jeff Pickhardt (JP): For one, I’m a big CCG fan. I’ve played a number of CCGs and enjoy many of them. However, I wanted one that could be played online with any operating system, was highly strategic, and could be played asynchronously; I play asynchronous chess with some friends, and thought it’d be fun to do the same thing with a CCG. When I looked around, I couldn’t find any that were what I was looking for, so I was inspired to make one. 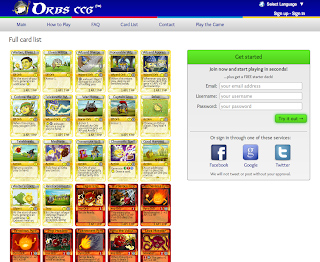 DD: Orbs is a HTML 5 game. Why did you decide to use that platform?
JP: HTML 5 games have a number of advantages. You can play from any browser and operating system, or even your phone or tablet. Since people spend so much time working in a browser nowadays, it’s more convenient to open a tab to play a quick game than it would be to open an application. It’s also much quicker to deploy new features to a web app than it is to a native app, especially compared to waiting for approval from Apple.

HTML 5 gaming is becoming more and more popular these days. For certain types of games, like card games where the strategy is more important than special effects and frame rate, it makes sense. For other types of games, like a first-person shooter, you’re probably not going to use HTML 5, at least not yet.

DD: Digital CCGs are growing in popularity. What separates Orbs from the pack, and how can an indie developer like yourself compete with the “big guns,” in this genre?
JP: First, it can be played asynchronously, like Words with Friends or correspondence chess. This works in the following way. The first player plays their turn, then leaves and does something else. The second player then plays their turn when they get a chance. Then the first player checks back later to take their next turn.

This effectively splits the game up into one-to-four minute “time slices” that let you play while waiting for coffee, on your lunch break, while waiting for the bus, and other short breaks throughout the day. It also means you can play with your real-life friends, even though you aren’t necessarily online at the same time. This lowers the barrier to playing with your friends, ultimately making the game more social and fun.

Second, it’s a very strategic game with balanced cards. I’ve played a lot of digital CCGs and some are not very strategic. Also, some of them intentionally have tiers of more powerful cards, as a way to incentivise players to buy more. I think buying more cards should happen because you want to have more variety and try new cards, not because you have inferior cards.

Third, it has some interesting new game elements, such as the resource system. In Orbs CCG, there is no dedicated resource card. Instead, once per turn, you can convert any card into colored energy, ensuring you never feel frustrated for having too many or too few resource cards. It also has an interesting system of bluffing, since any card can be benched face-down for use later. 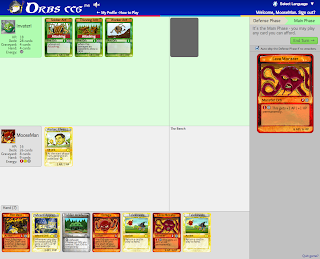 DD: How accessible have you made this game? Do you expect people to buy as many booster packs as they would in, say, Magic the Gathering?
JP: I’d say it’s pretty accessible. New players to the game start with a free starter deck of their choice and some free booster packs. Additional cards can be purchased from the online store.

If you’ve played other CCGs, you’ll find it easy to pick up and play. Even if you haven’t played CCGs, I’ve added a guided tour to Orbs CCG that walks you through the first game against a computer.

It’s a free-to-play game, and it’s too early to say how many booster packs a typical user buys. Still, I don’t expect all players to buy cards. All players can earn a free card every day just for signing in, and also have a chance to win cards for playing games.

DD: Your digital cards have a lovely, but simple art style. Given the art is so important in CCGs for catching people’s eyes, what was your goal when aiming for this style?
JP: I knew I wanted to make it a fantasy game, but not “just another fantasy game” that would blend in with all the other wizards and elves. I knew I wanted something distinctive.

So I brainstormed a bunch of ideas and came up with the idea of “Orbs” – magical sphere-shaped creatures with arms, but no legs, who hover through the air.

DD: How do you see Orbs developing into the future?
JP: Now that it’s launched and has a growing community, I’d like to add more community features, like a leaderboard and friends list.

One guy emailed me asking about tournaments. I’d like to have those too, eventually.

DD: What were some of the stand out highlights and lowlights that you encountered when developing the game?
JP: For lowlights, I designed a tonne of cards and mechanics that aren’t in the game (yet). I’d like to see more cards too. I add new cards to the game regularly and some of those mechanics will make it in later.

For highlights, it’s great when players message me from the site.

DD: What advice would you offer other indie developers with ambitious ideas like your own?
JP: Good luck and have fun! It looks like a lot of work, and it is, but you’ll do it one step at a time.

DD: Finally, what games are you playing at the moment?
JP: Besides Orbs CCG, I also play Minecraft, Words with Friends, and chess. For chess, I play both live and asynchronous games on Chess.com.