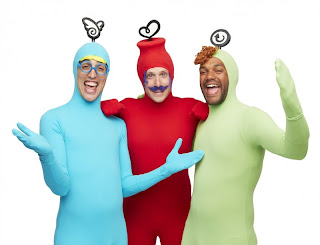 I’m always up for a good dungeon crawler. There’s something endearing about boiling the RPG formula down to its very most basic elements and giving players a framework for endless battles and treasure looting.

Denpa Men is, for all its gimmickry (we’ll get to that in just a second), a very traditional dungeon crawler. It has a little of the lightest of character interaction and puzzle solving, but a full 99 per cent of the game involves wandering through corridors and enlarged rooms, fighting enemies, and hunting down treasure chests.

Given that the only other 3DS eShop RPG title is the similarly-focused dungeon crawler Planet Crashers, I had some reservations about the game at first. Luckily this game is better by an order of magnitude. The enemies are cute and charming – straight out of the JRPG designs of old. The dungeon environments might not be pulsating with life or interesting places to visit, but they’re expertly designed to keep the action flowing. Combat itself is remarkably easy to get along with – and even includes some auto-battle options that are worth using to keep battles to just a couple of seconds in length. 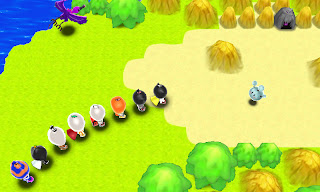 If all of this sounds very standard for the genre that’s because it is. Denpa Men is a very traditional game mechanically. Characters fulfil the same combat roles as usual for the genre and there’s the usual sense that if things start to get challenging then success is just a short grind away. The game stops short at throwing random battles at the player – enemies are found on the overworld and if they spot the party they will chase them down. Combat only occurs if the enemies catch the heroes. Because corridors are so thin, because enemies are so much faster than the heroes, and because the respawn rates are so rapid, for all intents and purposes it’s almost impossible to avoid a large number of battles and so the game is functionally no different from one that features random encounters.

However, it would be grossly unfair to suggest that Denpa Men does not do anything new. How players acquire a party of heroes is reasonably innovative, and certainly engaging. An AR minigame will cause Denpa Men to float around the real world, as seen through the 3DS’ camera. Lining one up in a cross-hairs and then firing a net will catch one, and players will be able to add it to their team from there. 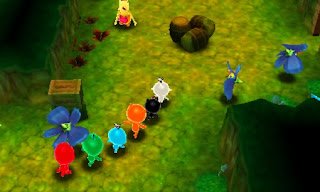 Each Denpa Man has a different colour – representing the standard fantasy elements that dictate what strengths and weaknesses the man has. Some also have antennas which give them special powers. There’s a bit of a Pokemon-style obsessive-compulsive theme running through the game that will have players spending a great deal of time catching Denpa Man to tweak the optimum team.

Unfortunately because the Denpa Men don’t develop the same range of interesting abilities that Pokemon do, it’s harder to form an attachment to them. Sure they’re cute (in a weird kind of way), but by the same token they feel incredibly disposable – spreadsheet rows to delete and move around, rather than characters with a unique personality.

And this goes to my core criticism of Denpa Men – it’s admirable that it’s so fashionably old-school when it comes to dungeon crawling, but the general lack of identity amongst the Denpa Men, the challenges they’re fighting to overcome and the world you will be exploring makes it very hard to really care about anything going on. Even now I can’t recall a single name of a single Dempa Man in my crew… that’s if they even have names. I honestly can’t remember as I write this review.

So if you’re going to enjoy this game it’s because of the slick, quick and bubbly combat system, the happy visuals (complimented by superb 3D effects), and the quirkiness of the AR minigame. It’s entirely possible that you will get drawn into the deeper nuances of party building, since each individual Denpa Man has limited skills and so there is real meat to that part of the game. You just won’t be playing Denpa Men for the usual reason people enjoy JRPGs – interesting characters and stories. Without those, this game feels just a touch too limited for its own good.

– Matt S
Find me on Twitter: @DigitallyDownld
And I’m on MiiVerse too: WaltzIT