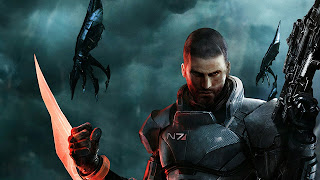 Ignoring the silly tantrum that many people threw over the ending of the game, Mass Effect 3 is going to go down as one of the generation’s finest games.

It’s also a game in a series that people who have stuck exclusively to Nintendo’s hardware have yet to experience. In that context it seemed a little strange that the audience for Mass Effect 3 would be jumping into the game in the third instalment – after all, people who play games on PC, PS3 and Xbox 360 would likely have already played this through.

The developers do a great job catching those players up, though. There’s an interactive comic at the start of the game that runs through the first two games, and gives players a couple of decisions along the way that will affect their experience in Mass Effect 3 proper. By the time the game starts players should have no trouble keeping track of the space opera. 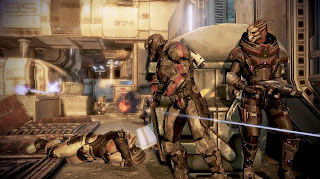 For the uninitiated, Mass Effect 3 is a third-person shooter with a couple of nominal RPG elements thrown in to remind players that this is a Bioware game. But it is mostly a third person shooter. In all honesty this series has always disappointed me from that perspective. I expect more from Bioware than linear corridor levels and the usual progression style of the modern shooter of running down the corridor, taking out a horde of enemies in a strategically open arena, and then running down the next corridor.

While that style of play works for a Call of Duty game, coming from the developer that produced Dragon Age: Origins, I find the shooter mentality a difficult barrier to overcome as I play Mass Effect games. The third game is by far the most closely aligned to the shooter genre, too. At the start of the game players can select from three different “play styles” – Shooter, RPG Mode and Story mode. In practice, this translates into nothing more that difficulty settings – Shooter is hard, Story mode is easy. I do still get irked that the assumption that Bioware made here was that RPG players don’t want/ can’t handle a challenge. This is not the case of course, we just don’t want twitch mechanics, and it’s quite disappointing that Bioware did not put more effort into giving RPG fans a challenge here. 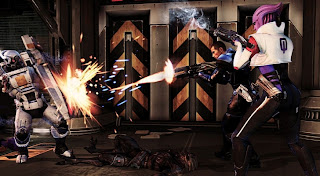 As a shooter though, it works, and certainly has the breathtaking scale of other blockbuster Sci-Fi epics such as Halo 4 and Crysis 2. The performances of the actors behind the characters is competent, if closer to Stargate than Battlestar Galactica. There’s a nice intensity to the plotting and overall this is a world that you want to explore.

The Aussies behind the port also did a great job of working some useful touch screen mechanics onto the GamePad. Players can activate their various special abilities by tapping them on the screen, and direct their AI allies around the place by interacting with the map. Because the action on the top screen is quite intense it’s hard to spend too long looking down at the screen, but it’s a nice touch. It’s also possible to stream the game directly to the GamePad, though this means it plays out like a conventional console game, and you no longer have the touch screen for activating abilities. 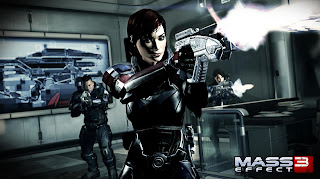 In general, the port of Mass Effect 3 is expertly handled. The multiplayer works without a hitch, the visuals are rendered perfectly and the Wii U hardware is comfortable with the game. There’s even one new weapon to play with. It’s hardly enough to justify a re-purchase, but it’s evidence that the development team genuinely cared about this game.

And as such, it’s a very easy game to recommend. The Wii U launch saw ports of some of the finest third party games on the PS3 and Xbox 360, and this is one of the finest of those games. Unlike, say, Assassin’s Creed 3 or Darksiders 2, this is not a lazy port. Unlike Warriors Orochi 3, this is not a port hamstrung by technical issues.

Make no mistake, though, this is a port only for the people who haven’t played the game elsewhere. And for all its hype, it’s also not a game for RPG fans. It really is just another great Sci-Fi shooter hiding under the thinnest veil of player interactivity.