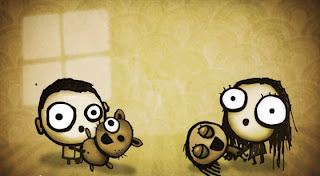 I really, truly love Little Inferno and the philosophy behind it. Clearly built by very intelligent developers, the game is a deep reflection on the games industry itself, and in the process it exposes some themes that should make people a little uncomfortable. Nothing is as effective at getting people thinking as when they’re challenged, and in many ways Little Inferno is mentally challenging – and stimulating – indeed.

With that opening, I know some people will now get confused by the score at the bottom of the review, so let’s take a crack at explaining why I’m so conflicted about whether Little Inferno is actually worth buying.

On its surface, Little Inferno is a game that is from start to finish a criticism of the kinds of games that Facebook and Zynga popularised. Like those games, there’s no real point to the game – players just dump toys that they buy with virtual currency into a fireplace, and set them on fire. It’s a literal play on the impression many have that anyone who spends real money on FarmVille and the like are burning their money away. 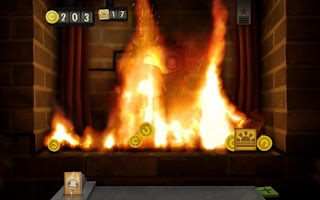 Little Inferno continues the gag further by making people wait for the toys that they purchase to “be delivered” – a slavish devotion to the style of Farmville-style games and the perfect lampoon of the idea that when a player clicks on anything in these games they have to wait arbitrary period of time to be able to do anything with it, or repeat that action again. In a game like FarmVille these forced time delays are of course designed to encourage people to use real money buy tokens that allow them to speed things along. Little Inferno is however not microtransaction-supported, and gives players those “paid-for” tokens for free. As a consequence, the time delays between actions is essentially pointless but becomes an apt demonstration on just how far Little Inferno goes to attack the highly cynical business models that are built around the likes of FarmVille.

To the very core of the game Little Inferno is self-referential, openly mocking everything that games like it offer players. It’s not all in good humour either. The developers wanted people to feel deeply uncomfortable about this game while they play it, and they succeeded at that. Despite the happy Tim Burton’s Scissorhands-style visuals there’s child-like screams as you burn a toy school bus. In another toy I burned I found a used syringe. The music at times jumps from the kind of perkiness of a FarmVille game to be downright depressing. It was clearly the intention of the developers to make the players emotionally involved in what was going on, and they succeed. Despite being so disconcerting, the theme of Little Inferno is often genuinely compelling – a kind of “feel bad” compulsiveness that is the perfect foil to the “feel good” adventures that FarmVille players experience. 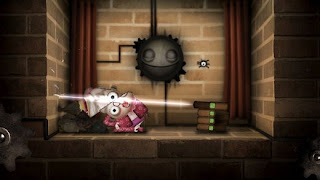 So as a piece of criticism this game works on a very deep level, and it’s mission accomplished to the developers in the sense that this game will indeed make people think about the nature of these kinds of games and the business models that support them. But here’s the problem I have with Little Inferno: It’s fine to criticise something that you don’t like. It’s even better if you can do that in an engaging and compelling way. I’m a huge fan of using shock and emotion to illicit a response from your audience. But if you as the artist end up doing that by doing the exact same thing as the material you’re criticising, are you not telling people they they should not be playing your game?

In other words: Little Inferno from start to finish is telling players that Little Inferno is a worthless game. Indeed, Little Inferno is, if anything, even less of a game than FarmVille and co. In FarmVille players go from an empty screen to a massive farm filled with virtual stuff. Yes, it’s useless stuff and yes, the game is a time sink and quite possibly an expensive one at that. But players do end up with something to show for their time and effort. 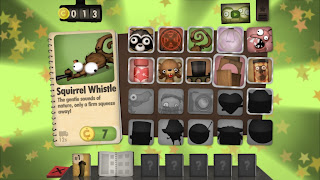 With Little Inferno you’re literally destroying everything you earn. There’s a bit of a game involved where you will need to burn specific combinations of toys to unlock more toys, and those combinations are only hinted at by the game – you’ll need to figure out the specifics yourself. But aside from that all you’re doing in this game is repeating the actions you would in a FarmVille game, and then destroying the stuff you just “worked hard” to obtain. It’s a time sink that does not even try to pretend it’s anything else.

Furthermore, one of the main appeals of games like FarmVille is something Little Inferno misreads entirely – their highly social nature. These games are not about sitting at home lonely and clicking away on patches of virtual farmland – it’s about gifting stuff to friends, visiting their farms, and pulling a community together around a shared experience. This is a feature that makes these games worthwhile even if you’re not that into them – I know I’ve played FarmVille-style games on and off over the years because my wife has and enjoyed that side of the experience a great deal. Little Inferno’s way of dealing with it is to have pre-written “letters” sent by NPCs at regular intervals. It’s here that Little Inferno’s philosophy breaks down a great deal.

Players can burn the letters sent to them by these NPCs, which suggests that the developers consider the time spent on these kinds of games as social interactions as much of a waste as the money spent on them. It is not something I agree with, and the attempt to lampoon that element of the genre ends up feeling like the joke told at the party that no one laughed at.

Despite that philosophical flaw, Little Inferno is a clever effort that is a completely worthless game. I really want to encourage indie developers (and mainstream ones, for that matter) to play this game and digest it. Look at the MiiVerse community that has built up around it – there is an audience for games that offer nothing more than the promise that they will engage with players on a near-academic level.

But by the same token I don’t want anyone who buy a game and then get upset with me for recommending something that, by its own admission, is deathly boring.

So how about we do this nice and bold, and then stick a score that’s right down the middle: If you do believe that games are art, and that gaming can offer more than dumb entertainment, then buy it. If games are nothing more than a stress release to you, don’t.