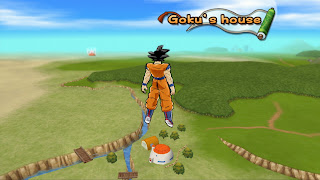 It seems like there are a tonne of these HD remakes rolling around lately. Some people are very much against them, others love revisiting old favorites with a fresh gloss of paint. I have only had a chance to play a handful of them, including the recent Dragon Ball Z Budokai HD Collection for the Sony Playstation 3.

These sort of flashes to the past are always a somewhat risky proposition for gamers. We tend to look back at older favorites through the rosy glasses of nostalgia and forget/overlook their shortcomings. However, sometimes you find a game that still resonates with you when you put it in and play it, and I am happy to say this collection was one such title for me.

I had never played the first Budokai game, but had played the second and third. The third title has been my favorite Dragon Ball Z game – ever, and that is on any console. Now, this collection is missing the second from the series and only comes with Budokai 1 and 3. I admit that seems odd to me since there should be plenty of room on the discs for including the second game, but I think parts 1 & 3 are different enough that it is not a big deal. 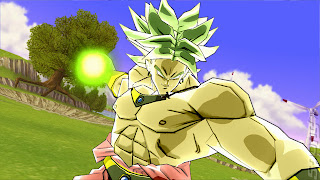 The first game is actually somewhat similar to later iterations of Dragon Ball Z that have come out, in that you play through a storyline and switch off characters at various plot points as you progress. The storyline here is actually pretty short – I got through that mode in the first evening. The extra modes (like a non-storyline arena) were a nice enough distraction too, but again I got through most of that by day two. Because I had never played the first Dragon Ball Z Budokai game, it was nice to be able to go back and see it, but it did not hold my attention particularly long. The HD update pops with some vivid colors, but the screen is still presented in standard dimensions and there is not a ton of detail in the characters or backgrounds.

It should be noted that the combat here is not terribly deep. The Dragon Ball Z games will never be mistaken for tournament class fighting games like Street Fighter or Virtua Fighter, as they tend to opt for simpler mechanics that allow for some button mashing success. Generally if you know the moves you will do better than someone who does not, but these are not real technical fighting games.

Moving on to Dragon Ball Budokai 3 however, I immediately found myself picking it up and running with it. This game feels different to me than others in the series, as the Dragon Universe (storyline) mode is very non-linear. You pick a character and progress chapter by chapter, so you will not go facing Cell before encountering Raditz. However you do find your character of choice flying above the landscape and you have the freedom to move in any direction. Sometimes you will encounter landmarks or points of interest you can interact with, or you can go right to the red dot on the map indicating the location of the next plot point.

Searching out these side items can be quite worthwhile as you will pick up new skills, grab money, trigger more storyline scenes and sometimes unlock hidden characters. The way the storyline mode works is you choose a character and you play through events from that character’s perspective. So instead of a single storyline where you keep swapping who you are using, this one presents a bit more of a fragmented view. This can be a bit confusing if you are not familiar with the characters or the series, but I actually found it a lot more enjoyable to be able to focus on a single character at a time. 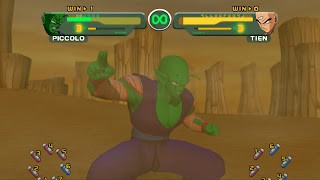 There are some nice RPG elements to be had here as well. You earn experience and money. With the experience you gain levels and Z Points you put into different statistical areas like damage, defense and the power of your special moves, giving you a bit of customization to suit your playing style. You can find and buy skills and items to equip your characters with as well. There is a lot of content here to be unlocked as well: hidden characters, voice samples along with skills and items. There are also a couple of different non-storyline modes like arenas that also allow you to earn money.

The graphics and voice work are all very good in this version of Budokai 3, and the collection of trophies give you plenty of reason to go back through and replay again and again. Unlocking some of the hidden characters can be quite challenging to say the least. There is also a certain sort of cinematic quality to this particular title, as certain events can trigger cut scenes and quicktime events during combat. For example, you may hit your opponent with a knockback that sends them flying into a mountain, or if you activate a Dragon Rush you might wind up locked into something of a game of rock/paper/scissors-like combat. Also? Some of the super moves you can pull off are a lot of fun.

That said, this is a very straight port from a gameplay and options standpoint. Aside from the omission of Budokai 2, there is no remixed soundtrack and no online options – a couple of features that tend to find their way into HD remakes of fighting games. Still, I did not find myself missing these omissions much, and found myself enjoying my trip back down memory lane with my favorite Dragon Ball Z game ever.