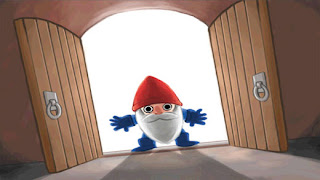 When the endless runner genre is done well (such as Rayman Jungle Run or Run Roo Run) it’s compulsively addictive. These games can be bite sized and challenging, and yet the controls of them are so simple, and the game’s goals are always so close to being within reach that that “one more turn” stubbornness hits like a sledgehammer.

When endless runners get things wrong you get 2 Fast 4 Gnomz. I literally found the time I accidentally got a wooden splinter stuck so far under my fingernail that I had to go to a doctor and have the entire nail cut off more entertaining. Because there was blood when that happened, see, and according to most big-budget blockbusters blood is fun, no?

I digress, but that’s because I don’t really want to think about Gnomz, much less play it. But as I am the consummate professional here I go: 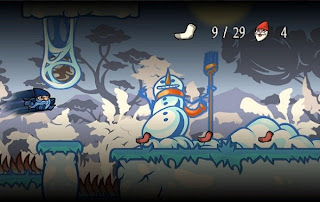 Gnomz is a very ugly game and so, is immediately inferior to Rayman Jungle Run or Run Roo Run. It stars a tiny little sprite that kind of looks like a sunlight-faded gnome running from one side of a level to another, collecting little coloured lines that are meant to be socks. I think that’s the game’s idea of humour. Socks. Hahaha! The joke’s on the developer though because everything is so small that the socks don’t look like socks at all. Bad art direction – now that’s funny (unless you’re the one playing the game).

Of course, by the second level I realised why the sprites were so small – the gnome is a dynamic little fellow and runs at such a speed that every pixel of that 3DS screen needs to be stretched so that players can see enough of the level to move through it. Of course, the game’s obstacles also become tiny and difficult to see by this shrinking effect – so you’re going to die anyway. 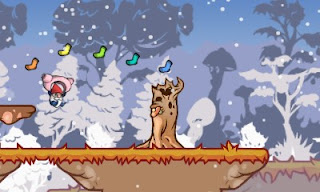 The only way to progress through this game is to die, and die, and die, and die, and eventually learn the pattern that will get you through the level. It’s frustratingly difficult, brutally unfair and downright stressful. Gnomz’ betters are paced in such a way that skill and technique will get you through most levels on the first try. The challenge in the likes of Run Roo Run or Rayman Jungle Run is in chasing high scores/ medals. Getting through the levels themselves is relatively painless. By the fourth level of Gnomz (so, literally one minute into the game) the difficulty of just getting through the level hits the roof thanks to the game’s speed and traps that are avoidable by literally one pixel. And then you get to go and do those levels again and again to try and get those “socks.” And then you get to do it again and again to try and not lose any lives in the process.

Gnomz would last all of an hour if it was not for that ridiculous artificial difficulty. Thanks to an utter lack of personality or charm though, I would not have bothered playing this to the end even if it did only take an hour to complete. Unfortunately though I had to for this review. Be glad that I play these games so I can warn you, dear readers, from wasting your time or money on them. If you don’t have a smart phone and so don’t have access to many endless runners, then save your money for Harmoknight, a 3DS game that at least promises to do something different, and if it fails at that, at least looks presentable.