When a game first comes out, there is this rush to try and play as much as possible as quickly as possible. This is especially true for those of us who are trying to review the game. Most games I review on here are ones that have been out for some time, but others like Madden I got to right away. I thought it might be interesting to take a look at the ‘season that was’ so to speak on Madden 13, now that the NFL season is starting to wind down. I have had a lot more time to play the game, and overall I have enjoyed it – but there have been some problems along the way as well. 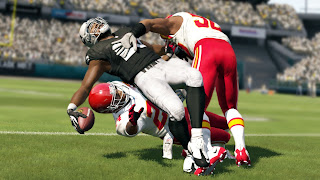 The biggest headline from EA this year was the Infinity Engine, and while it was far from perfect, it was at least something new and different. Overall, I feel like the engine was a success, but there have been quite a few ‘zany’ things that happened along the way. You see some tackles and animations – especially once the play is over – where a lineman may ‘bump’ a linebacker’s foot on the ground and go flying. Or you see limbs jutting out at ‘should-be-broken’ angles. Also, things like this happen:
Not the end of the world – not by a long shot, but it definitely added some quirkiness to the presentation. Another presentation item is the ‘holographic’ scenery around the playing field. One of my blogging buddies pointed this out in another post, and it has stuck in my mind a bit more while I play the game. Every now and then the camera angles in from over (and through) the crowd, or a defender walks through a guy on the sideline or a wide receiver catches a TD and promptly begins to celebrate while walking through the wall (maybe it’s the new Lambeau Leap?).
Now how much have I played since I wrote this review? Quite a bit. I am on my third season with my offline Lions franchise, won a season with an online players-only Connected Career, got through another season with a coach Connected Career and am currently midway through my fourth season with my old college buddy in yet another Connect Career. Oh, and I did a bit of Madden Ultimate Team too for good measure. I feel like I have had a pretty extensive look at the game by now and do not even want to wager a guess at the time spent so far.
Plenty of good persists:
– The online modes are fun (and they added fantasy draft apparently with a later patch – something I never really made use of anyway).
– The announcing and player progression are as good, if not better, than ever.
– The Infinity Engine keeps things looking different
– Frequent updating of the rosters and patching of the game helps keep things ‘current’ for NFL fans
However, some bad has clearly crept into the picture as well:
– There was a nasty crashing/system freeze bug that got introduced with a PSN update (I wrote about it here in depth – it has since been fixed).
– The game still has a tendency to ‘slow down’ when playing Connected Careers online, at least when working through the menus. I tend to do a lot of wheeling and dealing with my teams at the start of the new season and each season I inevitably wind up with menus while in the roster mode that freeze up and thereby lock up the game, forcing a restart. Twice this led to my whole system freezing – obviously not a good thing.
– A few odd glitches here and there, and not just with the presentation. For example I put my cornerback up on the trade block each of the last two seasons and it puts my backup free safety up there instead. I have no idea why.
– The ability to resume an online game. This is without a doubt my biggest complaint. There should be some way of Madden to save the game data on their servers in case the connection between one of the players degrades to the point of dropping. Neither myself or my old college buddy have great ISP options. Mine is better than his, it is still broadband, but we have had to replay a lot of games. I mean – a lot. We have had four head-to-head matches, but to get through them I would guess we have played fifteen to twenty aborted games to get there. Then, we reset our routers, try again and have to start from scratch.
– The lag. I realize this has plagued sports games forever, but there is so much data flying back and forth that the game still has a tendency to get jittery – especially later in the contest. It almost makes me not want to kick field goal attempts at all, because you can never really count on when it will ‘respond’. I have had dozens of games now online, and half the time I can’t even properly audible due to the lag. It gets better for a time, but then it gets worse again. Most of the time, it is fine, but when things get bad – they get really bad.
So overall? I would still recommend Madden to football fans. However, it is a bit frustrating that perhaps the best feature of Madden 13 is the ability to play a real, full-featured franchise online only to have the head-to-head experiences suffer. I have and will continue to play it heavily, I have no doubt. I just hope that the experience is smoothed out and improved upon next release.
Nick H
Follow me on Twitter: @Chalgyr
Friend me on Facebook: Chalgyr
Xbox Live, PSN or Steam: Chalgyr
Nintendo 3DS: 0559-7203-9384
Nintendo Wii: 0335 0073 6205 6088
Our Comments and Scoring Policy
Share this

The best games of 2012: Best Soundtrack

The best games of 2012: Best Narrative