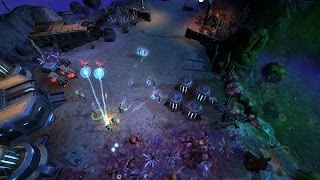 The features of a good Real Time Strategy (RTS) have been well established over the years thanks to intelligent games like Command and Conquer, Age of Empires and that pinkest of elephants (one who is almost fluorescent); Starcraft.

With such popularity to market off, the development of RTS games is thus a potentially lucrative gamble, but there is a simple caveat to that. The big developers are oft-times loath to take risks. Thus, it takes the special effort of an indie designer to break new ground. Sadly, with every innovated title comes multiple smaller developers who fail to make a decent dent into the field – where a favouring of aesthetics comes at the expense of gameplay. This stereotype is strongly supported by the imaginatively titled new RTS Tryst whose execution means that the title is the most effective aspect of the game.

Tryst’s basic goal is one of alien versus human tactical warfare. Control your set of regular soldiers, medics, engineers and special individuals (leaders) as they attempt to win a war of convenience. Set in a Starcraft-esque aliens-versus-humans universe, the aliens of this story have for no apparent reason launched a surprise attack and you are tasked with the duty of leading the military might of humans in a response. Tryst plays out as a typical RTS. Build bases, mine resources (there are two different types – ore and electricity), fashion troops and advance the technology so as to outfit your troops with greater equipment. This concept does look adequate on paper. 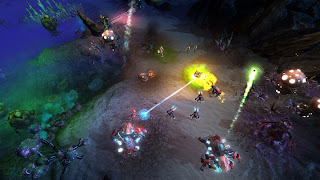 Gameplay is like one, very rapid Zerg rush. For those unfamiliar with the concept, the emphasis on the game is speed. Build as many units as possible and perform a veritable blitzkrieg on the opposition before you can be attacked yourself. It can be summerised in a single word: Overwhelm. To add three words to that: do it fast. Because the game likes playing fast, even the construction parts of the game play out ridiculously fast. Too fast in fact.

The Zerg rush is a fairly straightforward strategy, and that’s just as well because actually learning the game is a rather difficult task. There is no decent tutorial to speak of, and little to introduce you to the gaming world. It’s ok if you’re an experienced RTS veteran, because thankfully the interface is familiar and fairly clear, but if you’re not experienced at the genre, this is not the game to start with.

For the more defensively minded players, this game has some spectacular flaws, including basic base location. Building fortresses cost too much in terms of positioning and time and usually results in being beaten by a well-trained quick combat AI. Without the defensive element, Tryst feels a one-trick pony, and programmed by those who fail to grasp subtleties of warfare. Any depth or nuance is quickly forgotten in this game in favour of the tactical equivalent of button mashing. 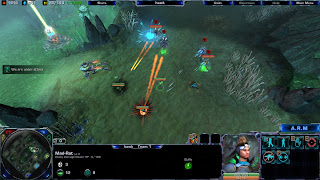 Good programming and design involves providing as seamless an experience as possible and it is with increasing frustration that games are currently being released without appropriate testing. Good programming is not found in Tryst. The game crashes to desktop as early as the first level, and is further hampered by what I can only assume is excessive code leading to slow loading speeds. Further, numerous bugs, animation flaws, poor voice acting, a bland, devoid landscape and a rather uninspired musical score mark the game as more forgettable then enduring.

If your idea of strategy is the bare knuckles, swamp the enemy approach this game will appeal to you. It may even provide a few hours of basic fun. For everyone else, stay clear. There are other, better games that provide a much greater experience.