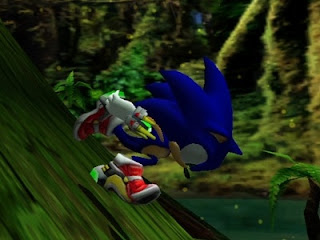 It has been two years since Sega released Sonic Adventurefor Xbox Live and the PlayStation Network. In that time, fans have been begging, pleading, and making petitions for the game’s sequel to be released in the same format. If you’ve played either title, you’re doubtlessly aware of how “stable” and “well-functioning” they are, yet both maintain an enthusiastic fanbase. Beyond nostalgia, what makes Sonic Adventure 2 so dearly loved?
Right off the bat, you’ll notice that Adventure 2 is more streamlined than its predecessor. It has trimmed the fat of the adventure fields and narrows things down to three stories rather than seven. As such, the focus on narrative has increased exponentially.
Whether you’ll find it compelling or not is open to discussion, though there was a clear effort to do something fresh. You can play as Sonic and company as you attempt to save the world from demise or attempt to inflict that destruction as Eggman, Rouge, and Shadow. It’s the tale of vengeful black hedgehogs, shattered jewellery, plot holes, and corny dialog. Hardcore fans of the Mega Drive games will cry themselves to sleep over Sonic fighting the military whilst newcomers become relatively engaged by the high-stakes drama.
When you get down to the action between all the cutscenes, you’ll quickly realize how varied it is. There are no fewer than five radically dissimilar types of gameplay: action races, shooting stages, treasure hunting, kart racing, and chao gardening. There’s even a complementary multiplayer mode for each.
Both the action and shooting stages are enjoyable pastimes. Despite the relative linearity of levels, rolling around at the speed of sound and pulling off tricks is as fun as it was in Sonic’s days of yore. In fact, I’d wager some of the levels are the most feel-good in Sonic’s career. The shooting stages are slower and lack the same finesse as the blue blur’s outings, but racking up combos and spraying down the neighbourhood is good fun.
The treasure hunting and kart racing should be worthy modes but are heavily marred by design oversights. The former has actually seen a downgrade from the original Sonic Adventure. In that game, your radar would flash whenever in proximity to a jewel, no matter its order. In Adventure 2, however, you’re forced to follow a linear pattern. This makes hunting far more monotonous than it needs to be, considering you’ll (unknowingly) pass the other emeralds multiple times just searching for one.
The racing stages are extremely finicky, thanks to the turn button being mapped to the same one as the acceleration. This makes for unwieldy driving, causing your kart to skew all over the place and crash into walls. When you do finally get a hang of the awkward controls, it’s still not exactly Mario Kart.
Beyond the four mandatory styles of gameplay, you’ve got the fan-favourite Chao Garden. Without spinning off into another review here, it’s a clever way to encourage replaying stages so that you can develop cutesy A-life creatures. With some tweaks, it could be a game of its own.
As a whole, the game is blemished by a dubious camera. It’s not the worst you’ll find in an action game, yet it will occasionally add extra seconds to your speed runs in crucial situations. On the bright side, the number of glitches has seen a reduction (though I suppose that’s like saying stale cheddar is better than mouldy Swiss).
It may seem like I’m rambling on about the gameplay incessantly, but that’s ultimately what redeems Sonic Adventure 2 from its myriad of flaws. Despite the individual and overarching qualms, there’s something so innocently captivating about each mode that warrants completing every mission and side task. With so much content and diversity, you’re never at a loss for things to do. Best of all, the chao garden seamlessly intertwines with the other sections of the game so that every death, camera failure, and obnoxiously hidden emerald shard is worth your time.
The soundtrack provides even greater incentive to soldier on through the more taxing levels. There’s a healthy blend of lyrical rock, instrumental romps, and side-splittingly tacky rap songs. Sonic rarely puts out a bad soundtrack, but Adventure 2 deserves special mention for being among the best.
Lastly, it’s worth noting that more work has gone into this port than the digital release of its predecessor. Even if the HD isn’t as eye-catching as it could be (the textures themselves don’t appear to be upgraded at all), it’s infinitely better than having blue and black borders surrounding a small square screen. There’s no online multiplayer or chao sharing, but at least Sega saw fit to throw in some developer videos and interviews to round out the package.
There’s no point in pretending otherwise – Sonic Adventure 2 is a mess. Luckily, it’s one of the best messes you’ll ever play, keeping you crawling back time and time again for over 100 hours. If you’re willing to contend with Adventure 2’s many quirks, you’ll find one of the best value buys on digital shelves today.
-Clark A