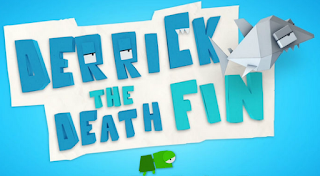 The world’s very first underwater paper craft videogame, Derrick the DeathFin, has swam its way onto the shores of the PlayStation Network and surprisingly, it never gets the slightest bit soggy.
The striking aesthetics that makeup the vibrant underwater world that the game’s protagonist – the cute, yet revengeful shark made of paper, Derrick the DeathFin himself – lives in, is made up entirely of paper and cardboard. Developer Different Tuna has remarkably created a colourful, playful world that’s constantly changing environmentally: you’ll start off swimming in tropical waters filled with colourful fish, crabs and children swimming about playfully, but you’ll eventually find yourself skimming through the icy, glacier filled waters’ where the elusive Killer Whale roams and you just might even spot a pyramid in your travels as well. There’s just no telling what you’ll come across in these wild paper crafted waters, but you’ll definitely want to see them all. 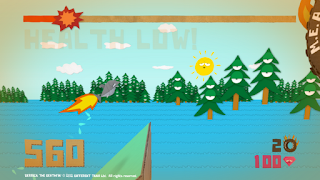 Gameplay here is simple and intuitive, but oh so fun. In a mix that you’d only find by mixing Joe Danger and Eco the Dolphin together, Derrick the DeathFin’s side-scrolling levels challenge you with an assortment of tasks: most levels require you to chomp down anything and everything that moves to gain enough points for a gold medal, as well as collecting gems scattered about and jumping through multiple flaming tires that are magically suspended in the air to get full completion for the level. But, our hungry shark’s extreme metabolism requires the constant need for paper nutrition to keep him alive, which in turn creates a brilliant sense of urgency being built into the game, because when you’re trying to nail a tough jump and you’re health is rapidly fading away, tension builds and you’ll have to make instant decisions to either go for the jump, or find a bite to eat before doing so. Thankfully, the levels are designed to be quickly learned and played through, and you don’t have to complete all the objectives in a single play through either. There are also a few levels that have you rushing through them against a time limit, a handful of (hilarious) environmental disaster levels to progress the story along, as well as levels with frightening underwater bosses made of paper. Yes, gamers with a tremendous fear for aquatic paper monsters beware; they even bleed out paper-mache! 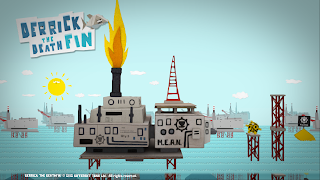 Derrick the DeathFin’s gameplay is as fast as it is fun. Chomping down underwater critters and snapping paper birds out of the air against his extreme metabolism is a blast, err… splash, but it’s the whimsical sense of humour that flows through the game that puts this paper shark’s game into the top tiers of PSN’s extensive library. See, Derrick’s parents are killed off by the M.E.A.N. Corporation in a hysterical opening cinematic that finds them being sucked up by tubes from those pesky humans above and converted into Shark Fin Soup. Destined for revenge – he’s so mad that he gives you a toothy smile and a little wink before each level starts – Derrick’s out to stop those pesky humans in any way possible and take down the M.E.A.N. Corporation from below – oil rigs, chemical plants or anything else that they’ve got, nothing is safe from Derrick’s ferocious paper teeth.  The comical nature of the game is overly charming and keeps your spirits high, even if you’re struggling with a particular level’s objectives.
If there’s one criticism to be had about Derrick the DeathFin, it’s only that it’s all over a bit too quickly. While it’s a game that’s suitable for players of all skills and ages, those possessing a high skill level will breeze through the game to 100 per cent completion in around four or five hours. In the latter end of the game the level design gets so good and challenging that when it all came to its hysterical end, it still left us wanting to bite right into another continent. But, with its low asking price of only $7.99 / €6.99, there’s little to complain about here and we’d expect (hope) to see a few DLC packs ride the digital wave our way going forward.
Different Tuna’s Derrick the DeathFin takes a bite into the PlayStation Network and maybe it’s his paper teeth, but it doesn’t hurt a bit. Instead, we’re treated to the first (lovely) underwater paper craft title that’s swimming with fun and just as charming as our other friends that live under the sea. If you’ve enjoyed the awesome wave of indie titles as of late, then you don’t want to let Derrick the DeathFin wash you by. Just beware, Derrick burps profusely – you can’t say we didn’t tell you!
– Chris I.