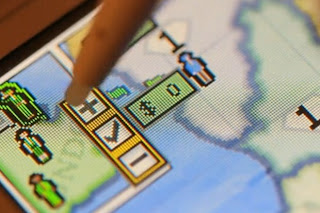 There was an interesting video posted over at Gamespot a couple of days ago that raises a question that a lot of those in the games industry has been asking themselves: Are games being ‘dumbed down?’

It’s a common debate and on one level it has legs because games are generally becoming easier. Early-era games, such as Super Mario Brothers, Mega Man and arcade titles like Space Invaders or Pacman would be over in just a few short minutes. With no way to save games, or the need to press players into adding more coins to the arcade cabinet games were typically focused on very simple ideas that took a great deal of skill to do well. If games had have been ‘easy,’ they would have lasted no time at all – or a player would be able to bankrupt the local arcade by hogging the machine for hours at a time on a single quarter.

Fast forward to today and you’ve got games that feature extensive tutorials that ease you into the game, linear progression between events and highly projected objectives – a lot of modern games literally lead players through it from start to finish. Even the supposedly hard games of the modern era – such as Dark Souls – are nowhere near as difficult as early-era games. They’re challenging in the sense that they require players to learn from mistakes and inch forward one attempt at a time, but there’s minimal punishment for each “failure” – there’s no threat of a dreaded “game over” screen at any stage, for instance. Being good at even the most challenging modern game is more a challenge of persistence than the reflex

To a lot of gamers – especially those that grew up through the era of arcades and primitive sprites – this represents a “dumbing down” of games. If a game doesn’t present immediate threat to your digital avatar, then to these people the game is a lesser experience.

I don’t necessarily think that’s the right attitude. To me the games industry has become a case of “you can lead a horse to water, but you can’t make him drink,” to use an old turn of language. The reality of the games industry is that it has developed into a richer tapestry of creativity, and indeed emerged as a viable art form in its own right. The “point” of a game is no longer to test your own skills, as such, or even “beat” the game (at least, in single player. I’ll get to multiplayer in a minute). The point of games is now to provide gamers with depth in narrative, philosophy and interactivity. It’s the precise opposite of “dumbing down.”

And yet a lot of gamers and game critics seem to miss this. I constantly mention this game at Digitally Downloaded, but Lollipop Chainsaw was torn to shreds in many critical circles by people who missed the irony, the social criticism and the postmodernism of one of the most intelligent game scripts in some time.

Or to be even more controversial: the story of Final Fantasy XIII is widely derided as being inferior to that of, say, Final Fantasy VII and VI. And yet it’s actually a far more complex plot that cuts to the very heart of some very real social tensions within Japan currently. Final Fantasy XIII itself is not “dumbed down” as some have claimed. It may well be inferior to the earlier games in the series (an entirely subjective argument I’m not getting into here), but being generally easier to play and very linear does not refute the fact that the actual game is far more complex in terms of its actual ideas than Square Enix’s earlier output.

There’s some historical precedent to what’s happening in the games industry right now. One of the first popular novelists to use a format that we now recognise as a modern novel was a man called Daniel Defoe (Moll Flanders, Robison Crusoe). Those early books were criticised for being (to paraphrase) “dumbing down” of literature, which to that point had meant “poetry.” Similarly, the early era of films was largely dismisses as a novelty – a distraction that, like a circus, was briefly diverting rather than enlightening. It wasn’t until the likes or Orson Welles and Citizen Kane that popular culture started taking cinema seriously as a storytelling medium.

I see parallels here. There’s a certain sense in the gaming community that holds on to the old way of making games like it’s something sacred. Retro gamers, as such, are not overly fond of the new approaches to game design, because the new approaches to game design ignore certain traditional approaches to game design (such as difficulty) to open up new ways to explore interactive storytelling and the artistry of game design. The complexity in which modern games ask their players to engage with them is, in other words, at odds with their desire to sit down and bash away at some buttons. Just as the novel is no dumber than the poem is reality, the new ways that games are made are no less intelligent than retro games. It’s just that the intelligence is channelled in a different way.

Now, none of all this is to say that games have completely forgotten their heritage as skill testers. It’s just that those functions have moved from the single player game to multiplayer. Call of Duty online is an amazingly competitive game with a seriously high skill curve. As someone who isn’t great at shooters I know this first hand. The entire existence of professional gaming an eSports is contingent on games featuring multiplayer modes that are not “dumbed down” – the simpler a game’s online play becomes the less interesting it becomes to competitive gamers. So really, even from the perspective of the traditional approach to game development, there hasn’t been a “dumbing down” of game design. It’s just moved to a more appropriate arena.

All that said, there are positive indications that on the periphery of the games industry, there’s recognition that “easier to play” does not mean “dumbed down.” In the indie game development scene, Jason Rohrer is a bona fide artist. His games are hugely difficult on a conceptual level, but incredibly simple to play, and it warmed my heart that he managed to get a DS retail game, Diamond Trust of London, funded through Kickstarter. That game itself is a wonderful exploration of various economic theories and that there were enough people willing to support on faith suggests that there are indeed people that like exploring games at a deeper level than simply in the pursuit of “fun.”