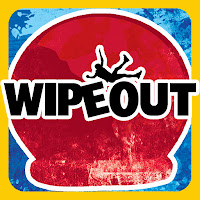 No, not that Wipeout- the gameshow… from TV! Activision and The Blast Furnace bring the water-logged game to iOS, but does it manage to reach the finish line?

I wasn’t super familiar with the ABC gameshow Wipeout before I fired up the game of the same name on my iPad. If you’re not either, here’s the setup: contestants run a tough obstacle course that’s very reminiscent of Ninja Warrior and pretty much any old-school Japanese gameshow.

Huge (padded) pistons pop out of the walls, teeter-totters swing wildly, and giant (ahem) balls swing like pendulums into the hapless runners. Everything has but one goal, to smack the poor sap in question off the suspended course and down into the cold, cold, water below. …so sad.

Well, not really. Because what I’ve seen of the show is really funny, and that gleefully carries over from the telly to the game. Seriously, I laughed out loud at times here. I know Jackass built an empire out of it, but I’m still surprised at just how funny people falling down can be.

When you fire up the game, you’ll be met with a pretty loaded main hub screen. There are selections for the usual options and social networking features, as well as a ‘try out’ for the show button (which is basically just a tutorial for the game). The real beef here are the Play Wipeout and Time Trial modes.

TT should be pretty self-explanitory- you can blast through a timed race on any course that you’ve already unlocked by playing through the main game. And that main game is pretty darned fun.

All in all there are four courses to unlock (with another two on the way), and a bunch of playable characters that each have their own strengths and weaknesses. For a game that’s this ‘simple’, that’s pretty cool. You can also outfit your character with special helmets that will grant them added abilities for their run through the course- powers like extra high jumps or slow time can be yours for the right price. 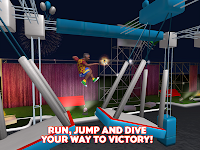 As for the levels themselves- they’re just a lot of fun to play through. Bright and colorful with some nicely laid out obstacles and hazards (that can actually be pretty tough) they offer a surprising amount of variety. And the falls and crashes are awesome.

I know it’s just the five year old in me, but I haven’t laughed this hard at a game in a long time. Watching a spill off a platform and down into the moat that runs underneath isn’t just a passive activity either. Particularly ‘bad’ falls are caught with an instant replay cam that can be controlled by the player. Feel free to forward and back to your heart’s content when one of these pops up as it wont affect your time.

One thing that won’t be contributing to those falls, by the way, are the controls. Wipeout controls really well on the touch screen of the iPad and iPhone (it’s a universal app). Simple swipes and taps control your character as they make their attempt at soggy glory. If I had to recommend one over the other though, I’d say play on the Pad as the small iPhone screen can get a little cramped. 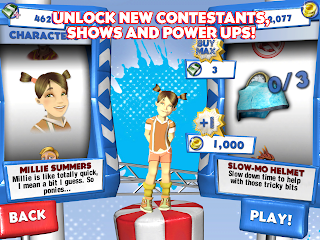 There’s a lot to like about Wipeout, a surprising amount- at least for me. I didn’t expect there to be all that much going on with this one. I have to admit, I had pretty much written it off as a gimmicky app designed to catch the attention of folks who watch the TV show. Happily, I was way off on that one.

Developer The Blast Furnace has taken what could easily have been a ‘mail it in’ prospect and actually made something fun out of it. Wipeout is a very simple game, it’s not going to break new ground anywhere, but it’s a fun time and is easy to get into and out of in a few minutes- perfect for a mobile game.