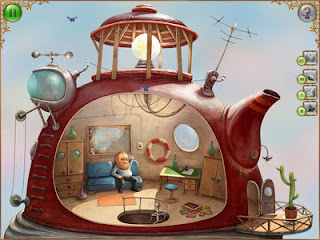 Puzzle/hidden object games seem destined to be the next tower defence of the casual market world, and just like tower defence genre, the market is saturated with a spectrum of qualities, some good, some not so great. So where does the game Tiny Bang story fit into the spectrum? Sadly the shallow end of the range, although it does land in the kiddie pool in style. An auspicious start is beautifully rendered as the player witnesses the breaking of the world they are thrust into.

A collision between two planetary objects – one in the shape of giant soccer ball, one presumably an asteroid; leads to the disruption of the fabric of Tiny Bang story’s universe. Artfully represented, the flat universe falls apart as a giant jigsaw puzzle, its pieces scattered. And so, the gamer under no guidance assumes that it is their job to search and collect the pieces to put back together.

Re-uniting the world is what we do best after all. To complete this simple goal the player is transported into hand drawn stages with the goal to find puzzle pieces. Essentially Tiny Bang Story is a puzzle game, with a heavy hidden object feel. Sadly however, the game flutters between challenging and downright frustrating. You are given no context. Not a single iota of text in the gaming world. The player knows not who they are, what they do, or indeed why they are doing it. It’s as though the playable character has no soul. The story is, as a result, weak. 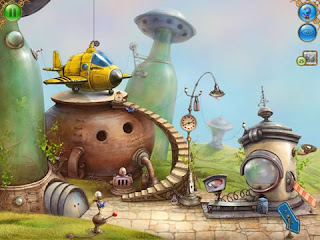 So, with no guide whatsoever, the player begins their journey, stumbling blindly across the admittedly aesthetically appealing map. Random interaction with the in game environment will generate a series of objectives, indicated by another list of items on the toolbar, but some of the time it is far from an intended action. Should the player get stuck, a hint button is available but it is far from a ‘get out of jail’ card, and will not assist in ‘puzzle block’. Indeed, some of the challenges will have all but the steeliest resolve jumping towards a walkthrough.

A nice touch to this system though is that you’ll need to earn that hint – it is recharged by collection flies that buzz into the game environment. For a game like this the touch mechanics of the Android/ iOS should have been in their element. Sadly, though the interface is executed it is capably enough the game is not sensitive enough and the objects are sometimes too difficult to interact with. Zooming mechanics were occasionally woefully inadequate. And so there is frustration as the player could spend a great deal of time searching for the last object to complete a quest – merely because the first attempt to interact with the correct object was rejected for being minutely off. 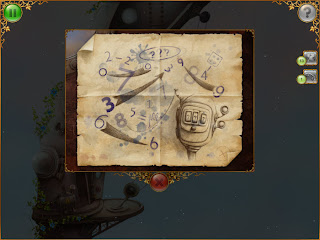 In Android/ iOS terms, this is a game definitely for the tablet devices rather than the handheld (phone) equivalents. Difficulty in gaming is important in puzzle games – puzzles that are too difficult can provide frustrating blocks, yet every player wants to be tested on their abilities. Angling towards the more difficult in mini-game puzzle terms (A particular Venn diagram style puzzle could lead to the foetal position), Tiny Bang story does provide a stiff but eventually achievable challenge.

What is remarkable is the obvious thought into varying designs in puzzles, with a great range including mathematical and engineering challenges, spacial awareness and, in one delightful trip into memory lane, of handheld consoles. Once again though what lets the game down is that the lack of text means very few instructions for these mini-games – it will stump most novices badly. Its artwork is impressive, and honestly, such a unique presentation is joyful to interact with.

With stunning boot and teapot house motifs, Tiny Bang Story feels as if pulled directly from the nursery rhymes. A truly talented artist has portrayed a great world to be in, as his/ her work truly pops off the Android screen. Tiny Bang Story has virtually no replay value, and considering its length is a mere five levels, it may feel to some players as being remarkably short. For those who do pick it up, it will provide an interesting and varied challenge that may be intermixed with frustration. The hand drawn artwork marks it as something different and unique. More for the ardent fans of the genre than casual newcomers, Tiny Bang story will nonetheless make a fun afternoon.