A man trapped between two dimensions tries to escape a disintegrating alien base in this puzzle-laden, side-scrolling shooter. Cool, right?

Fractured Soul is an interesting game. At first, I thought it was a straight-up action/ platformer- but it’s not. It’s actually more of an action/ puzzler.

There’s definitely some shooting going on here, with plenty of bad guys to plug away at, so don’t get me wrong. It’s just that most of your time is spent trying to negotiate the gamescape that developer UTV Ignition Games has put together.

You play as Jake DeSaul, an interplanetary rouge and generally salty space-dog. You might not know that as you fire Fractured Soul up though as the story segments are told through short quotes in between levels. Not the greatest way to handle a deep story, but then Fractured Soul isn’t really about that anyway- it’s about the gameplay and the hook.

And that ‘hook’ is that Fractured Soul uses both screens of the 3DS as gameplay arenas. Jake can ‘shift’ between a pair of dimensions with each screen representing one of those universes. They’re slightly different from each other (in some places though, a lot different) and can present some significant challenges as you make your way through. I especially liked the ‘submerged’ levels contrasted with the open air ones; figuring the physics of falling through water and then shifting back to dry land for the landing is really pretty slick. 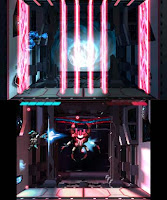 It can be a little hard to describe so here’s an example of what I’m talking about: Jake has a series of platforms and laser gates in front of him. He has to shift back and forth as he jumps across the solid ground and shift in mid-air as he passes through a gate to avoid being fried. It can be a very tricky affair and restarting a dozen or so times isn’t exactly outside the realm of possibility- at least it wasn’t for me.

Not that it’s all that annoying though. Most of the time the game starts you very close to the point where you died so it’s not the end of the word. Levels are also pretty short and can be easily digested which makes for a very nice and tidy mobile game experience.

Graphically, this is a nice looking game – not spectacular – but nice. Fractured Soul has this high-tech look to it that probably should be awesome, but it just comes across as  kind of bland. I wish the enemy designs were a little more interesting too. They’re basically all just robotic looking (come to think of it- so is Jake), generic, evil dudes.

Actually, Fractured Soul is kind of like its premise when you get down to it. It’s really a game with a split personality. On the one hand, the base idea behind it is very cool and undeniably imaginative. I like the use of both screens as play areas a lot and I don’t think it’s something that’s been done before, at least not in this way – so points for that too.

On the other hand, the designs for the level architecture and characters are ho-hum at best and the storyline is all but nonexistent. There just isn’t too much of a personality going on here and it’s a shame because the gameplay is actually pretty fun. Fractured Soul could have been a real show piece for the eShop, as it stands it’s just another momentary distraction, albeit an entertaining one.