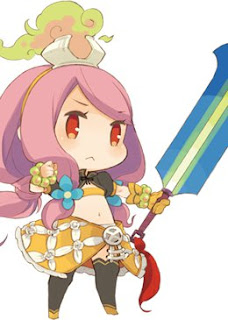 Despite myself not being a huge fan of Japanese role-playing games, I have to give Nippon Ichi Software (NIS) credit. In a time where even new first-person shooters can be considered a gamble in the video game industry, NIS is still deciding to translate and distribute JRPGs alongside other stat-oriented Japanese games so that the rest of the world may enjoy them. I swear, the American divisions of that company must contain some extremely passionate individuals, because they surely can’t be doing it for the money.

With that out of the way, ClaDun X2 is another localised offering from NIS of America. If ClaDun X2 was a restaurant, it would advertise its endless array of dungeon dishes, all of them coated lightly with ClaDun X2s special crawling spice mixture. In other, more understandable terms, ClaDun X2 is a dungeon crawler that contains randomly-generated dungeons. This game was developed by System Prisma, the company that just had its newest game Legasista released on Playstation Network courtesy of, you guessed it, NIS of America.
Now, if you have been paying close attention to the Japanese role-playing scene, you will have already noticed that ClaDun X2 is not a new game. Rather, ClaDun X2 is a PC port of the original version that released for the Playstation Network in Fall of 2011. As a PC port, ClaDun X2 is a mixed bag. Resolutions are fixed to three pre-set options, key bindings are half-locked, and the on-by-default V-sync option creates flickering black bars while forcing the game to stay put at 30 frames-per-second. Those options are not as bad as they sound (except for V-sync, which is atrocious), but they are limiting and do not offer the freedom of PC-oriented games. However, one could argue that those aspects are completely outweighed by the fact that menus allow mouse control, which is almost undeniably better than scrolling through menus with a directional pad or control stick. 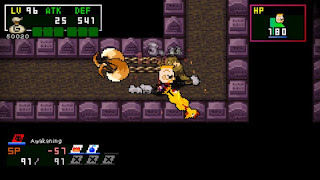 As for ClaDun X2 as a game, I feel a bit conflicted. The game is very fun and definitely not a boring dungeon crawler by any means, but it lacks a tone that makes any game outclass peers of its genre. Partly does its attempt to outclass other dungeon crawlers fail because of the game mechanics, but the majority of the blame can be put onto the story and investment of the player within the world. Those last two aspects of the game are not done poorly or below average, but they fail to be ambitious in any noteworthy way.

As dungeon crawlers tend to be, the player will be doing a lot of dungeon traversing in ClaDun X2. In terms of gameplay, ClaDun X2 is not throwback to classic rouge-like dungeon crawlers nor is it similar to the Diablo series. ClaDun X2 is more akin to an action role-playing game in the vein of Kingdom Hearts minus all of the anime tropes and general Japanese storytelling weirdness (and naturally the Disney characters). The player character can attack and block while also casting spells and using abilities. Besides some status effects that the player can become inflicted with, there is not a whole lot else that affects the player. There are different weapons suited towards different classes, but besides the bow they do not act too differently to say that they can lead to entirely changing the play-style of an individual. All that said the combat is quite enjoyable as it is simplistic enough to quickly grasp and just get into the thick of a fight.

As a replacement for a standard points-distributing system, ClaDun X2 has a very neat system that it calls the “Magic Circles” system. Every class has a set of, for lack of a better term, “Upgrade Trees” whenever they are created (new trees are also acquired when characters level up). Every tree has a varying amount of spots that other characters can occupy. If the player decides to add a different character to one of those spaces, the health of the different character is added to base character. Along with that addition in hit points, a player can start adding artifacts to adjacent spots of that different character. Artifacts usually increase the stats of either the base character or the different character, with examples being hit points, attack damage, and defense points. This is really neat, as this mechanic makes the somewhat brutal difficulty of ClaDun X2 more fair and also encourages players to create a party of characters rather than be forced into taking care of a squad of adventurers which they never asked for. 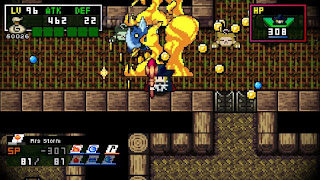 I feel I have an obligation to also mention the sound and graphic designs. The music in ClaDun X2 varies from gorgeous to good, with some tracks have beautiful changes between real instruments and others having good if stock compositions. The graphics are a mix between detailed backgrounds and pixel-art characters/enemies. The contrast not only makes identifying enemies from walls really easy, but it also gives the game a sense of style not easily found in other games.

The player integration and story is where the game fails to elevate itself. The story is mostly taken for laughs at first, poking more fun at Japanese narrative devices and blatant Japanese culture rather than trying to take those elements seriously. Granted, that is what I got from the story as I am not a native Japanese speaker and I cannot be entirely be sure that NIS America did not use artistic license when translating the text. However, about at the three-fourths point of the game, the story actually takes itself more seriously. I’ll admit, I did not expect that to happen at all and the following plot details were almost touching. The game even threw me a bit of a curveball in terms of gameplay because of the story (although admittedly it was easy to ignore). However, the change in tone did not match what I had been doing within the game for the past 18 hours. 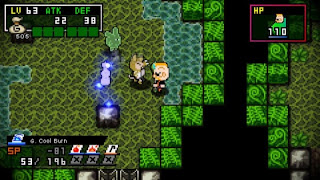 At the beginning of the game, the only real goal is to complete dungeons for the sake of doing it. In fact, the game flat-out says to the player that there is no hope of any advancement or discovering any new place that is not filled with monsters. When I understand I am essentially running through dungeons for no reason other than to complete dungeons, it really takes something to make me rework my mindset. And the game never does that; the story shift, while interesting, did not make me rethink what I had been doing, mostly because I still needed to complete dungeons for no real reason. Needless to say, the game made me grind so much such that I could not really change my drive that made me play the game.

I will admit that the criticism I have against ClaDun X2 is purely from the standpoint of wanting the game to become something more than a very entertaining dungeon crawler. If you are looking for a fun, non-taxing dungeon crawling experience, you cannot do much better than buying ClaDun X2. However, if you really wanted something more, something that would really change your perspective on what dungeon crawlers can be, you are out of luck with this title.