The Mac App Store is now home to one of the fastest selling digitally released games of all time- Dungeon Defenders.

Mac gamers are finally be able to join their console and PC cousins in defending some cartoony dungeons today as Dungeon Defenders has hit the App Store for $14.99 USD. If you’re somehow not familiar with Trendy Entertainment’s sword & sorcery hit- there are goblins, elves, and orcs to smite all while protecting dungeon-sweet-dungeon.

Dungeon Defenders is one of the fastest selling downloadable games of all time. Bringing together the best elements of tower defense and action-RPG progression, it allows players to team up and fight across 15 unique maps, 30 challenges and four difficulty settings in all of the game’s loot-raiding, spell-casting, level-up stacking glory. Players control one of several distinct heroes in an epic bid to fight back an ancient evil. Each character comes with special functions, and players can create and customize/upgrade an armory of weapons and equipment. 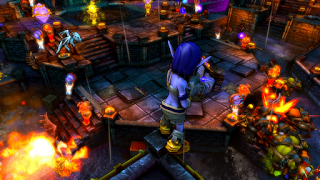 The Mac edition of the game comes complete (at $14.99) with all the DLC previously released, you can grab it here.

Atelier Totori Plus – tons of screenshots