Two weeks ago, digitallydownloaded had boots on the ground for the biggest pop culture event of the year. Now we’ve put together a special presentation showcasing the best of the best on the show floor.

Comic Con really is like nothing else. Not even the bigger shows from around the world can match the event that resides in the San Diego Convention Center (for now at least- rumor has it that it may move to Vegas in ’14). The scope is grander than anything else I’ve ever been to, rivaling even E3.

The city itself even becomes part of the festivities. Street performers, random (seriously) parades, and more cosplay than you can shake a lightsaber at are everywhere. And then there are the parties. San Diego is a bit of a party town to begin with, but at Comic Con it’s celebrity party time.
Big time companies from gaming, television, movies, and comics all hold events for both attending press and stars. Most of the shindigs revolve around launches or new seasons and films- all are as opulent as can be afforded as putting on a show is a big part of what the SDCC has morphed into from its comic book roots.

Go out into the Gaslamp district pretty much any time of day and you’ll be hard pressed to forget that the SDCC is raging. Gaslamp is an entire neighborhood filled with high end restaurants and hotels, by the way. The trendy mini-city is known for it’s functioning gas lamps that mark every corner and it’s basically one gigantic night spot… except during Comic Con, when it’s an every-minute-of-the-day spot.  Gaslamp surrounds the gigantic convention center, just across a main thoroughfare, and is host to about a billion (my estimate) parties per night.

One of the greatest experiences at Comic Con doesn’t even have anything to do with the convention center. Even if you don’t have a ticket to the show itself, walking around the city is a whole ‘nother spectacle. Ever walk down the street and find Jabba the Hutt chilling out on his Sail Barge? How about stumbling onto a bunch of zombies and a bloodied & bashed up car? These are just a few of the things that are hidden around San Diego during the show- it’s almost like an Easter egg hunt.

Sega, Cryptozoic, Nintendo, and more even have pop up stores and arcades in and around the city’s heart. Yes, there are plenty of games to play at SDCC- both out and about in the city itself and in the convention center. The trick is having the intestinal fortitude to fight through the crowds and outlast the lines.

Capcom’s booth is always a hot spot with fighting game tournaments and new game kiosks aplenty. This year the publishing giant brought its upcoming big guns in the form of games like Resident Evil 6 and Lost Planet 3. They also had a huge amount of mobile games set up for play. Semi-casual titles (like Shrek for iPhone) had shockingly large presences and were spotlighted in a way I don’t think I’ve personally ever seen before from a major league pub.

Halo 4 was a massive draw with lines reaching well out of Microsoft’s underrepresented show floor booth. This is, of course, because the Xbox company has a ‘lounge’ in a nearby hotel that’s set up with both games and couches in abundance. This is something that both Nintendo and Microsoft do every year (Sony has a large booth with plenty to do right in the con). I’ve personally never seen the draw since it’s way more fun to just hang out on the show floor, but private lounges seem to be the way to go for two out of three of the big boys. 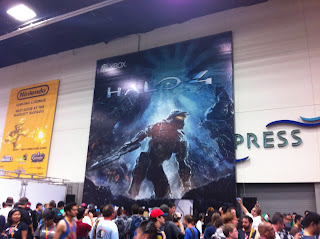 Maybe it’s in an effort to keep their wares separate from the bulk of the con, because gaming isn’t the focus of the San Diego Comic Con in any way- not by a long shot. Though it has gained a significant foothold at the event (which I assume will be getting bigger and bigger as the years go by), gaming plays a back seat to an industry that’s almost gotten as prevalent on the SDCC floor as comic books- and that’s the movies.

One of the biggest reasons, of course, is that many comic book properties cross over into the film and television mediums. Superheroes and comics are hot stuff in Hollywood these days and it was as apparent as ever at SDCC ’12.

The DC Comics booth featured costumes and props from The Dark Knight Rises, Watchmen, and the upcoming television series based on Green Arrow- which is titled simply Arrow for some reason. I was more than a little surprised to see a Deathstroke mask in that particular display. Suddenly my hopes for the show (which I wasn’t overly impressed with from the previews) went way, way up.

But H-town’s presence wasn’t just limited to comic book properties from Marvel and DC. Fans were able to get up close and personal with a bunch of awesome props and vehicles from some of the biggest series and ‘event films’ in history.

Knight Rider’s K.I.T.T really never gets old, does it? Even David Hasselhoff was there for a bit- no drunken sandwich eating though.

Another major presence at the show was, as usual, toys! A subject that’s near and dear to my heart, video game themed action figures, statues, and collectables have become almost as major a force as superheroes in the collector’s market. Not that comic book stars have faded away. Thought there aren’t as many collector lines available today as there were back in the ’90s, DC and Marvel are still major forces.
There were a lot of awesome things to see at SDCC in the collectables arena in general though. So much so that I thought we’d switch gears here in this special Comic Con feature and break things down by company. We’ll start, fittingly enough, with DC Comics.
DC Comics
The DC booth was awash with signings, free pins (huzzah!), and awesome statues and toys.

A very nice surprise was the DCnU series from DC Direct. I had only seen a few of the Justice Leaguers up till the show and it was pretty awesome to get a good look at the Parademon and the absolutely awesome Darkseid.

One of the most impressive figures I can recall seeing a long, long time- Darkseid is about twice the size of the other figs in the series and towered over the diorama that was set up at the booth. These are starting to ship now with Batman in comic shops already. The rest of the JL members and the Parademon will be shipping at pretty regular intervals (so check your local stores), but there’s no firm word yet on the master of Apokolipse… and I’m getting antsy.

Mattel continues to produce its DC Universe Classics series as a subscription only collection as a part of its Matty Collector website. So far the first series of Club Infinite Earths has been a modest success, selling enough subs to support it for its inaugural 2012 season.

Currently, the 2013 sub is up for order on mattycollector.com and the only way it will continue is for fans to buy in and lock down a subscription for themselves for the coming year. If the figures shown off at Comic Con are anything to go by, then fans might want to get out the checkbooks as these are some really nice niche characters that you probably won’t ever find anywhere else.

DST has been producing some pretty fantastic toys for a long time now. Its incredibly addictive Minimates have always been a particularly huge hit for the company. They showed off some brand new series of the little guys at Comic Con including new Marvel vs Capcom, Fantastic Four, and X-Men sets. 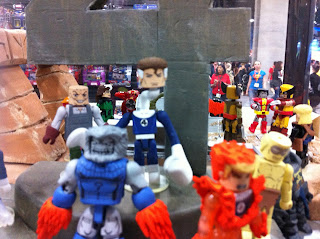 Diamond’s Marvel Select figures were also in full force with an awesome Rhino, Storm, Nightcrawler, and maybe the best Venom any company has ever produced.

The X-Men’s Storm will be available in her classic costume from her first days on the mutant superhero team- and with two different hairstyles no less!

This Rhino figure is one of the chunkiest toys I’ve seen in a while. He’s right up there with DST’s Juggernaut and Hulk figures in just sheer impressive size. 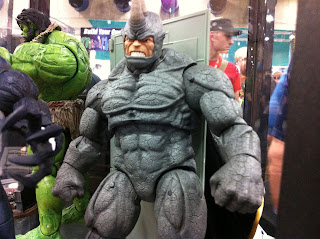 The complete Venom figure with all his accessories was not shown, not that he wasn’t cool enough all by himself, but this is guy is a Venom fan’s dream. The final version will ship with the head shown in the pics below, a more Todd McFarlane-esque head, a long tongue (yes really), an Eddie Brock/symbiote morphing head, and two sets of hands!

Sideshow makes some of the coolest and highly detailed stuff on the market. They didn’t disappoint with this year’s SDCC display, not that they ever do. I’m going to end our look at the show with them, as they were possibly my favorite booth of the year.

So that’s it! The best, neatest, coolest stuff I saw and my personal picks of the show. And man, what a show. I can’t say it enough- the San Diego Comic Con is one of the most impressive conventions that I’ve ever attended, bar none. I never get let down by this show and there’s not a year that I attend that I ever feel like it was a waste of time.

I don’t know if there’s a place other than the SDCC where the worlds of pop culture in general come together as seamlessly as they do at Comic Con International. It really is an amazing event and I can’t recommend it highly enough to anyone who’s thinking about attending.

Are you a comic book fan? Toy collector? Gamer? Film buff? Go. There’s so much to see and do (and buy)- it’s completely and utterly amazing on every level.

Just, uh, a few things… book your hotel/flight as soon as is humanly possible. I mean as soon as you get your ticket. Book. You don’t ‘have time’. Just trust me on that one. And try to stay in the Gaslamp district, it’s awesome.

Oh, and if you want some really great Italian food- go to Asti on 5th. And for ice cream go to Crunch Time Popcorn & Kim’s Creamery! Uh, yeah… *ahem* there are a lot of great places to eat at Comic Con too.

The Xbox Live update is zombie-tastic