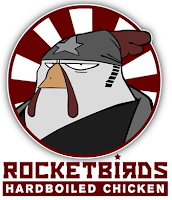 If you pre-order the game now from Gamersgate or Rain Digital, you’ll be on the recieving end of some very cool little perks. One of which is a playable Budgie. Who happens to be a commando. And wields a Photon Blaster.

For $9.99, gamers who preorder Rocketbirds will instantly receive four tracks from the game written and performed by New World Revolution – “The One,” “Illuminate Me,” “Double Agents,” and “Once I Was Lost (KF Remix)” – the remix being a version of the song that’s only available by preorder. The game will then later release with an exclusive Budgie Commando, Agent H, who will wield the totally unique and devastating Photon Blaster. This opportunity is limited up until the day before the official launch date, which will be announced in the near future – in the meantime, check out the brand-new trailer featuring one of the New World Revolution songs, “Double Agents,” featuring Agent H. himself!

I love how deathly serious this trailer is- fantastic.

Rocketbirds: Hardboiled Chicken (currently available for the PlayStation®Network) expands the Rocketbirds universe with new characters, missions, puzzles, exclusive music videos, retro cut scenes and more. Set in Albatropolis, a land full of birds taken over by a totalitarian penguin regime, Hardboiled Chicken, the original Coq of War, must assassinate the evil penguin leader Putzki. His mission will unlock the secrets to his mysterious, hard boiled past and uncover the real enemies of Albatropolis. In single-player mode, take on the role of Hardboiled Chicken and destroy your enemies with a slew of weapons you collect and unlock in each chapter. Master fowl play in the co-op campaign as a pair of Budgie commandos on a mission to save the general’s daughter. Many lives will be destroyed, countless penguins will die, and an astonishing past will be unveiled through a series of unlockable cut scenes and videos.

No word yet on a release date, but don’t get your feathers ruffled, Rocketbirds: Hardboiled Chicken from Ratloop Asia will be along soon.
Share this

Activision Anthology out now for mobiles