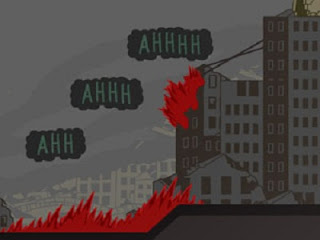 The two great handheld rivals – the Nintendo 3DS and the PlayStation Vita, have been compared head-to-head on sales figures in the past, and in the same week saw a major 2D platformer released. The New Super Mario Bros 2 release will likely sell better and keep the 3DS well ahead on the sales side of things, but you know what? I prefer Sound Shapes.

As a platformer, Sound Shapes is absurdly simple – far more than any other modern platformer. There’s the D-pad for movement, and a jump button. The little ball that you’re in control of is also sticky, and can travel on and around the various objects in each level (unless they’re red, in which case touching it is an instant death and trip back to the checkpoint). And that’s where the only other action button comes into play – a tap of the ‘R’ button releases the ball from whatever surface he’s sitting on.

So obviously this is not a standard action-platformer. It’s much more of a puzzle game, focused on navigating around the various stages and avoiding the traps lying about. The game is generous with the checkpoints, so the challenge comes in in speedrunning levels for online leaderboard scores. 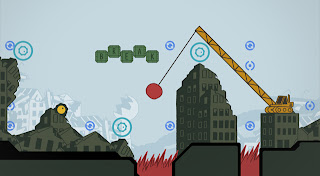 All of that sounds quite simple, and it would be except for, of all things, the soundtrack. Each level has little discs to collect, and picking those up adds music to the background tune. The more discs you pick up the more rich the music experience. On the more difficult levels it becomes important to make the jumps and drops to collect the discs in time with the music, and it’s here that the true artistry of the game becomes apparent. Sound Shapes is not a standard platformer – it’s an audio/ visual experiment that encourages players to not just interact with the visual platforms in front of them, but the noises they’re hearing. In that context it makes sense that the visual style of the game is so basic – the developers want you playing Sound Shapes with your ears, not just your eyes. Even the rhythm games struggle to achieve this.

In suiting the experimental nature of Sound Shapes, the number of levels “in the box” as it were are very small, and a solid afternoon will be enough to work through everything on offer there. But the point of those levels isn’t simply to complete the game but rather to unlock objects to use in the level designer mode. 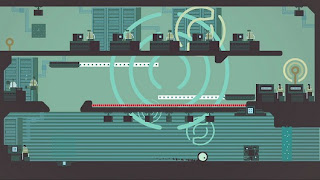 Yep, Sound Shapes has a full-featured level designer and players can upload their creations to share with the world once done. While it’s not possible to design the range of levels and gameplay styles found in, say, Little Big Planet, Sound Shapes’ level designer gives players amazing control over the music. So in terms of enabling creativity? Yeah, you bet this is up there with Little Big Planet; Sound Shapes does a fantastic job with this level editor, and already there’s some great work up online.

That said, there is a slight hitch – the level designer does use the rear touch screen for moving and resizing objects. In some ways this is a great learning tool for a hardware gimmick that is set on a steep learning curve, but one that has a lot of potential if developers can get it right. But even though it is a simple use of the touch screen, Sound Shapes doesn’t quite get it right. It’s a clunky and inefficient way to build up levels when the front touch screen would have worked just fine.

Long term though this becomes a non-issue, and in every other way Sound Shapes is, to me, the perfect platformer. Simple, elegant and literally filled with creativity, Sound Shapes is the perfect game for on-the-go entertainment.