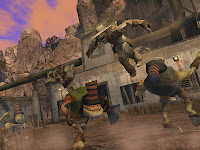 The Oddworld series may not have gotten any new installments in a while, but two classic entries are about to go HD on the PSV.

Both Stranger’s Wrath and Munch’s Oddysee will be getting all spiffed up with a shiny coat of ‘HD’ paint for Sony’s portable sometime soon.

Just when that might be is still kind of up in the air- though if the Oddworld Facebook page is anything to go by, you probably won’t have to wait that long as the developer had this to say: “but I don’t think you’ll have to hold your breathes too long ;)”

There’s also a remake of the original Oddworld title, Abe’s Oddysee, on the way. That game will be a “grounds up remake” that’ll blend 3D graphics with 2D gameplay. There’s currently a contest to name the game too, which you can get in on right here.

Also worth noting (while we’re mentioning the mythical land of Odd) is that Oddfans looking to fill the Oddvoids in their Oddlives can actually grab Stranger’s Wrath HD right now on the PSN- that version is only playable on the PS3.