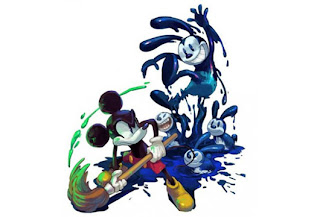 While the original Epic Mickey was a much-hyped game, it was also a game that was hampered with technical issues, so it sold well, but disappointed many.

Dare we care about the sequel? Why, of course we do. Epic Mickey 2 is a game we fully expect to resolve all those (camera) issues in the first game, and the trailer, which you can see below, looks absolutely fantastic.

There’s also a summary of the game below, pulled from the press release, for anyone who has managed to miss the Epic Mickey 2 news so far.

Disney Epic Mickey 2 returns Mickey Mouse and Oswald the Lucky Rabbit to Wasteland, an alternate world filled with more than 80 years of forgotten Disney characters and theme park attractions. But for the first time, Mickey and Oswald will join forces as true partners – Mickey with the magical paint brush that allows him to wield paint and thinner, and Oswald with a powerful remote control that allows him to command electricity. This new co-op play further enhances the idea that “PlayStyle Matters” — a unique approach to gameplay pioneered by Warren Spector where players tackle challenges the way they want to in order to explore a variety of possibilities and storylines, but always with consequences for their chosen actions.

Rainbow Moon now up for grabs in our Frequent Flyer program