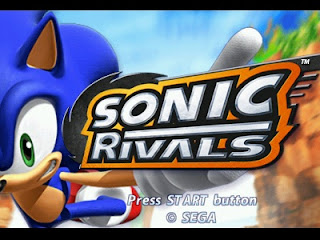 Ah, how times have changed. Sonic Heroes once encouraged us to tap into “the real super power of team work”, but Sonic Rivals says evil is so incompetent that the good guys can afford to beat each other up while saving the world.

Rivals blends the classic 2D Sonic formula with that of a racing game. Levels play out in a traditional format, where your goal is to make it to the end of the stage whilst collecting rings, beating up baddies, and utilizing level-specific objects or stunts. The difference here is that another iconic animal is on the stage, constantly trying to undermine you and beat you to the goal. To accommodate for the racing mechanics, there’s no lives system and your rings only decrease by a few when you get hit or fall into a bottomless pit. If you thought the regular faced-paced levels of Sonic were hectic, Rivals cranks that up a notch since you can’t just win by reaching the goal – you have to win the race.
Sadly, the quality of the level design is very inconsistent. Some stages are gripping enough to warrant revisits, whereas others play as if they were spewed out of an indiscriminate level generator. Particularly bothersome are the moments were you need to tap either X or O to send your character flying. These sections may very well be life or death situations and they’re often placed in overly penalizing locations. Other times, your rival will grab a zipline in a spot where there is no alternate way to progress, leaving you to die due to momentum or justifiable impatience (considering this is a racing game). Some trial and error will be needed to get past such instances. 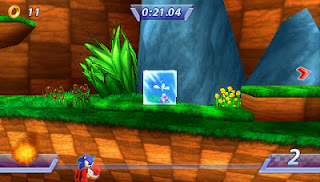 Once you’ve completed two stages, you’ll generally progress to a three way fight. Indeed, boss battles are also played out in the rival format. You and the corresponding hedgehog or echidna will face off in an attempt to land the most hits on Dr. Eggman’s machines. This should be an inventive way to add intensity to fairly traditional boss fights, but it falls flat due to a major oversight. The AI is so pitiful that it landed one hit on a boss during my multiple runs through the game. It doesn’t help matters that a loading screen before the fight tells you exactly how to defeat whatever mech of the day the rotund one is using.
In the end, there’s not a whole lot of depth to the rivals aspect. It basically comes down to a simplified Mario Kart item system being used within the standard 2D worlds of Sonic the hedgehog. Just like in those games, getting spontaneously hit by an item can send you flying off the course into a pit. Still, so long as you’re reasonably competent and can store an emergency attack item with you for the end of the level, you can always win.
After every race, you’re awarded with a card featuring a picture of a Sonic character. Most of them are pretty useless, lacking even background information about what they are. Should you get the right ones, however, you can use them to dress up your hedgehog/echidna with clothing. The clothes have no noticeable impact on gameplay, but at least this makes multiplayer battles more unique due to custom hedgehogs.
As you might have guessed, the “rivals” theme translates perfectly to competitive play with your pals. This is preferable to the standard AI by quite a margin. Once you’re done duking it out, you can also exchange cards, which is handy for those who don’t feel like enduring the inevitable monotony that occurs when you’ve only got a few more of the 150+ cards to collect. 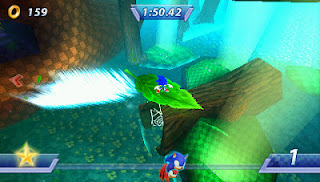 Sonic Rivals boasts a good load of content, but the appeal of it is questionable. There are only five characters and six worlds (some of which have no boss or just one level). You can finish every character’s story in a total of about three or four hours. However, there are also cards to collect and challenges to complete. The challenges could take quite a while to finish, but the need to do them multiple times on different difficulty settings extends things into the realm of uncomfortable repetition. Collecting all the cards will take some time, but as I said earlier, they’re not exactly compelling. Throwing in a couple more stages and characters with more unique routes would have been nice.
Graphically, Rivals looks the part. The 2.5D aesthetic never fails to impress, even if the characters can sometimes look too polygonal. While the soundtrack does nothing for me personally (which is quite disappointing, being a fan of the music in nearly every other Sonic game), it at least meshes favourably with the intensity of rival races.
For all my qualms about Sonic Rivals, it’s not actually a terrible game. If you’re willing to endure some annoyances, it offers decent action that works well in short bursts. Better intelligence for computer players and more consistent level design would have gone a long way, but Rivals might still be worth a look for Sonic fans.
-Clark A

Van Helsing trailer is looking sharp as a stake