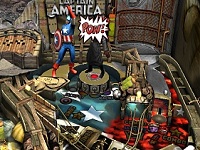 We kinda liked the original Zen Pinball when it released last year on the then fledgling Nintendo eShop. In fact, we liked it so much we gave it the Nintendo download game of the year award.

So are we up for some more pinball action from this incredibly talented studio? Why yes, yes we are. And it’s a Marvel Comics set of four themed tables this time around? Hah! Life doesn’t get better than this. And yes, this game is so good I wouldn’t be surprised to see it pick up this year’s game of the year award.

As mentioned, there are four tables to choose between, based on Iron Man, Captain America, The Fantastic Four and Blade. Each of these tables are themed in terms of the aesthetics, of course, but what impressed me from the outset is how each table is an abstract representation of the actual experience of each comic’s personality. Captain America, for instance, is a fairly standard pinball layout – what better way to represent the most traditional, iconic super hero? The Fantastic Four’s table is split into a few silos, each offering a different pinball experience to suit the hero (The Thing’s “bit” involves smashing stuff, while The Human Torch’s “bit” involves spinning a disc to get the flames burning hot). 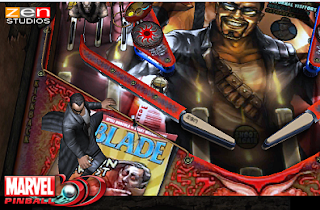 Iron Man (admittedly the weakest table of the bunch), is a brilliant reflection of Tony Stark’s clinical, but circular brain. As you knock the ball around the table you can literally watch the cogs in Stark’s mind turning. The result to all this is four tables that are each distinctive in play style, and each is far more than a the license being put to marketing use with some visual fan service – these tables are the comics in pinball form.

Anyone who thought that pinball can’t be artistic or creative, have a look at what these guys have done – abstract, expert design at its finest.

The design is helped by the same unparalleled physics that made Zen Pinball such a delight. The ball moves exactly as you would expect, and has a perfectly balanced weight to it. The incredibly rare moment of frame rate slow-down in the previous game has even been fixed here – with the (very helpful) 3D on, there’s not a frame of action dropped. 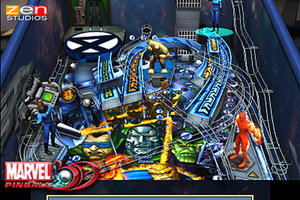 And most importantly, each table has its own online leaderboard, and each leaderboard lets you compare scores with the rest of the world, your friends list, and your home country. There’s already obscene scores up there (in fact, obscene scores that people on my own friends list have earned – hi Ben AV and Tech!) but hey, there’s a challenge for you.

Zen Pinball was the perfect travel company, and Marvel Pinball ups the ante thanks to some more identifiable tables. This is essential.