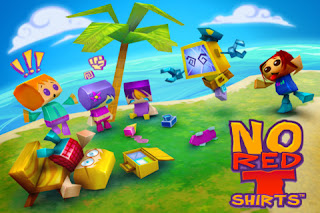 What would the world be like if every action was a crime? No Red T-Shirts offers insight into a futuristic government that attempts to undermine the populace at every turn. Well, that’s not entirely accurate, but it makes for a potential argument from the more cynical people suffering at the hands of a malfunctioning police robot.

Indeed, that concept is promising enough. A police robot was damaged during the final stages of shipment and thus proceeds to malign the populace in the name of the law. Notorious actions include sitting down, reading the newspaper, carrying a camera, and – you guessed it – wearing red t-shirts. All of these mundane routines are infamous enough to warrant fining citizens obscene sums of cash. The crimes gradually change over time, forcing you to change the types of people you target. You can even build up combos by taking out multiple evildoers consecutively. Doing so rapidly increases the fee you extract from them, which then goes to your robot (not that worthless justice system). 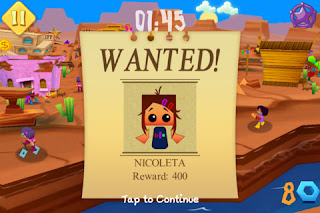 When you’ve got enough money, you can take a minute to upgrade the city. The fees you take from the locals during each round encourage them to take particular actions in subsequent playthroughs. Yes, you’re using the money from commoners so you can fine them more. On the (reasonably likely) chance you don’t feel like grinding for money to unlock new stages or purchase town upgrades, you can pay in various real-life increments to get a quick payoff. This is a smart design decision on one hand, but ultimately seems a bit money-fuelled when considering that the game itself launches at its own price tag of $2.99 USD. You need to earn a certain amount of money if you want to advance, so naturally, you’ll feel tempted to buy your way through the game when you’re forced to grind. On top of that, you need to accomplish certain goals in levels to move on, almost all of which are triggered by earning more of that precious currency.
The controls are streamlined and reasonably effective on the iPhone. A mere tap on an offender will have you digging into their pockets for their undeserved cash. Spinning around the camera with the touch screen is somewhat less intuitive than it could be, but you should be able to hunt down townsfolk without cussing at the futility of your robotic existence.
A bigger problem is that the wandering characters are quite small in size on certain levels. While this likely isn’t a problem on an iPad, it makes it somewhat trickier to discern the finer traits of your victims. Since the game constantly wants you to reach a quota of fines, every touch is important (particularly in the later levels). It can be somewhat unforgiving until you develop a certain mastery of analysing the little guys. 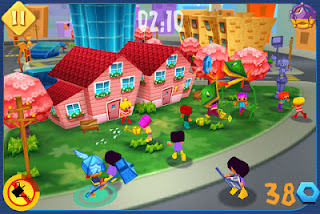 In general, things stay confined to a touch-based game of Simon Says X Where’s Waldo?. Even though there are quite a few events to spruce things up, such as “bed time” (a mode where you need to tap every single person in the city to enforce healthy sleeping habits), it’s largely the same game set in different locales. This  isn’t necessarily a bad thing, as it’s beneficial to both of those influences, but it does mean things can get repetitive quickly (even with the grinding taken out of the equation).
To the game’s credit, the art is very attractive with its clean, simple flavour. The 3D models work well (when you can see them) and help to give the game a rather distinct personality. Meanwhile, the soundtrack isn’t all that special, but it should at least put a grin on your face.
No Red T-Shirts is decent entertainment that feels a bit too repetitive for its own good. It breaks the traditional formula of item finding games, but the repetition and need for grinding means it can become boredom with a price tag. Still, consider it if you’re a fan of searching for things.
-Clark A

Summer of Arcade kicks off on the XBLA update

8bit Summer is the Pits on the Nintendo Download