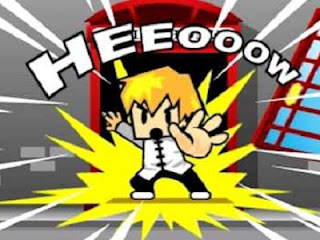 There’s not much variety to “old school action game” Johnny Kung Fu, but what’s there is fun at first. If only developer UFO Interactive Games could have been bothered to create more of it.

Johnny Kung Fu’s premise is basically Mario vs. Donkey Kong’s, stolen wholesale. But thankfully, the short animated cutscenes that tell this simplistic story are far more entertaining than that series’. Johnny’s girlfriend, Paula (remind you of anyone?), has been kidnapped by evil people, and Johnny has to Kung Fu his way to the top of a skyscraper to rescue her, stopping at over 30 elevator floors on the way up. If Johnny had just gone straight to the top floor this whole affair might have been a lot simpler, but that wouldn’t have made for a very long game, would it?

This game’s presentation is awesome, and is pretty much the only aspect of the game that will make you feel like you’re getting your money’s worth. The sometimes Game & Watch-esque, sometimes anime-style graphics are a treat for the eyes, and the animations – when not intentionally barebones – are sharp and fluid. And the music? While it’s purposely absent in the G&W sections, the different tracks, while not especially memorable, are pleasant enough to listen to as you ascend Unethical Financial Operations Tower (no, I’m not making this up).

The cinematics, as mentioned previously, steal the show here. The game has an instantly likable sense of humor that strikes the perfect balance between accessible and eccentric. Whether it’s the way the game successfully pulls off classic Nintendo and Game & Watch references or the oddly amusing voice acting, the cutscenes are guaranteed to put a smile on your face at some point. 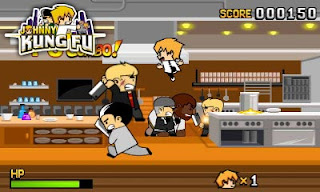 When it comes to the actual gameplay experience, issues begin to arise. There were a couple of design decisions that put me off initially, but I quickly got used to them. There is no stylus support in this game whatsoever as far as I can tell, and for some reason the action switches from the top screen to the bottom depending on the method of gameplay featured in a given floor.

The black and white Game & Watch floors are on the bottom screen, and the color beat-’em-up floors are on the top. Thing is, the 3D effect isn’t any more necessary in the brawling stages than it is in the minigames. It’s slightly jarring to switch screens every other floor at the beginning of a new game, although more gameplay variation is introduced later. In any case, it just feels like the developer wanted to make use of both screens somehow, whatever the costs in functionality.

Once you get past those two odd quirks, though, the game improves. There’s a certain charm to the minigames that resemble the likes of Ball, Donkey Kong (‘82), and Judge, even though they may feel a bit like rip-offs. I haven’t played all of the specific Game & Watch titles that served as inspiration for the developer, but its love for the series is clearly manifested in Johnny Kung Fu.

There’s something exhilarating about discovering how to get past the rolling bombs, flying axes, and security lasers in the Donkey Kong-like segments in order to make it to the next floor. The problem is the repetition inherently delivers diminishing returns, and there’s simply not enough variation in the enemy attack patterns and so forth to make these levels exciting for very long. 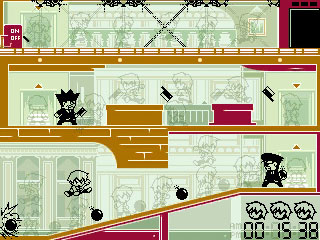 It’s not exactly a riveting experience from the start, yet it progressively becomes more and more dull as you go further up the tower, and it would become unbearably monotonous if not for some much-needed gameplay twists in between that slowly introduce themselves. That’s not to say it doesn’t become more challenging the farther you get, but increased difficulty doesn’t always equal more fun. Actually, in this case it equals decidedly less fun. I mildly enjoyed mindlessly beating up baddies the first few times, but when the last miniboss that almost made me get a game over (fun fact: Johnny Kung Fu does not lend itself well to restarting) became one of 30 enemies bent on killing me dead, I questioned why I was still subjecting myself to this sadism.

Now I suppose that all sounds rather negative and surprisingly evil for a $6 eShop download about Kung Fu. And really, due to the combined factors of stellar, dare I say flawless presentation and the gameplay diversity afforded by switching from classically retro minigames to modern, combo-filled combat, it’s not always as painful as it sounds. In fact, for a fair portion of the time I’ve spent with Johnny Kung Fu, I’ve actually had a lot of fun. That’s not even mentioning the randomly interspersed full-fledged boss battles, “Change to Colour Mode” fighting levels, and new and exciting Game & Watch… homages. It’s just that the game is set up to undermine its initially clever concepts by milking them for far more than they’re worth.

UFO’s philosophy with Johnny Kung Fu is to take a few fun ideas that wouldn’t be out of place as microgames in a WarioWareKung Fu-based diversions could become, and I never would have if UFO had put the time and effort into creating enough of them to at least sustain the game’s 30+ floors. Releasing this unfinished game and charging $6 for it are Unethical Financial Operations indeed.

Hyperdimension Neptunia mk 2 coming to a PSN near you