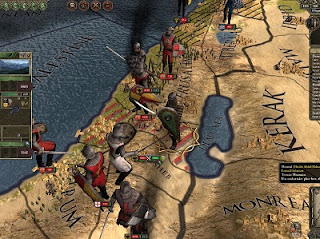 I’m a bit of a coward when it comes to Crusader Kings 2. I survived the Norman Invasion by hiding my troops in Wales until it was all over. I defeated Harald Hardrada by ignoring him until he wandered off. Mostly, though, I avoid the stresses of medieval life by playing as Eadric Wilde of Shrewsbury. Eadric lived around the corner from my house and, if the game is to be believed, he spent his time fathering children and going on work outings to Jerusalem. It all sounds rather jolly.

Spare a thought, then, for the leaders of the embattled Arabic nations. Sword of Islam is the first substantial DLC package for Crusader Kings 2 and, as one of the game’s newly-added Muslim rulers, you’ll find that a typical day involves scheming wives, treacherous vassals, lazy offspring, murderous assassins and – of course – the Pope. It’s a mighty strategic challenge, and it’s a world away from how we do things in Shrewsbury.

The most obvious change in Sword of Islam is the interface. The map has expanded to include the Arabian peninsula and a smattering of North African nations, and you’re given the option to play as any of the major families in the region. Paradox have worked hard to make sure that this expansion imparts an authentic sense of Islamic tradition, so the familiar stained-glass icons have been replaced by sand-toned geometrical patterns and the game’s random events have been reworked with a suitably Arabic feel. However, it’s the gentle subversion of the rules that’s most interesting. Muslim practices in the middle ages were quite different to their Christian counterparts, and the result is a game that feels different to anything that’s been done before. 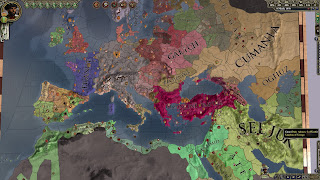 Let’s start at the beginning. Muslim convention expected the (universally male) rulers to take a number of wives, so the game provides a penalty to your Prestige until you’ve reached the required level of conjugal bliss. Shortly afterwards, your palace will echo to the pitter-patter of tiny feet. It’s endearing at first, but after a few years you’re overwhelmed with the critters and the game’s second subtlety begins to make itself felt. A surfeit of feckless younglings increases your dynasty’s Decadence score, and decadence is A Very Bad Thing. If you don’t take swift action then you can expect family strife, peasant uprisings and maybe even a nocturnal visit from the hashashin (assassins, folks – ed).

The solution is simple enough, and it involves giving the pesky delinquents something to do. They’ll need landed titles, and the best way to get those is to take them from someone else. Fortunately, the conditions needed for casus belli are significantly more relaxed than in the base game, so it’s never hard to find a reason to invade your neighbour. However, this will leave you dangerously overextended should the Pope come a-knocking with his army of crusaders. Which he will. 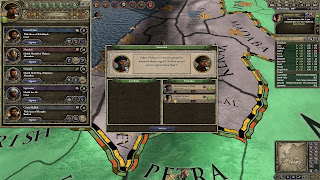 It adds up to a potent mix. Sword of Islam isn’t any harder than the base game, but it does have a rhythm and complexity all of its own. I was genuinely humbled by the gaps in my knowledge regarding Islamic culture, so I found the game both entertaining and educational. My only criticism is that the developers’ attention to detail doesn’t extend as far as the music, and it’s jarring to hear western-influenced pieces in an expansion that’s largely set in the Middle East. Because of this, I’d recommend that you pick up one of the music DLC packs at the same time as Sword of Islam. Or you could just play a Rachid Taha CD in the background. Your choice.

In many ways, this is an exemplary piece of DLC. If you have no interest in the geopolitical machinations of Arabia then you can skip it without diluting your CK2 experience in the slightest. However, it’s a great way to learn about medieval Islamic culture, and those who are already familiar with the region will probably experience the same hometown familiarity that I get when I’m playing as Eadric Wilde of Shrewsbury. If Paradox had paid more attention to the music then we’d be looking at five stars. As it is, we’ll have to settle for nearly perfect. CK2 fans who need a fresh, exotic challenge should check it out without delay.