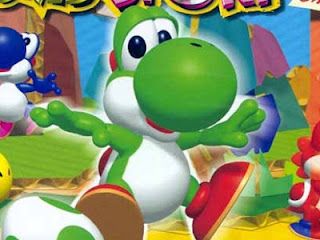 I’m going to make a very bold statement here: Yoshi’s Story is the most underrated Nintendo game ever made. The little dinosaur’s N64 romp has been criticised over the years for being too short, too easy, and not a patch on the game many argue to be the greatest platformer ever – Yoshi’s Island.

Yoshi’s Story is short, it is easy, but here’s the rub – I actually prefer it to Yoshi’s Island. This comes with the full disclaimer that I’m not very good at platformer games, and I don’t usually play them unless there is something else, aside from the running and jumping, to pull me in. Yoshi’s Story has that in spades – it’s a thoroughly charming and pleasant little game and, while it won’t last for months on end or challenge the reflexes, I have spent $Aus15 on far worse things in the past.

The presentation really kicks this game off in style. The sickly-sweet music and hyper-bright colours really does set a happy scene. The way the Yoshis skip merrily if left alone for a moment, or growl at a nearby wandering Shy Guy still – years after playing the game for the first time – brings a smile to my face. It’s a bit like an angry kitten, really. Adorable and completely inoffensive. 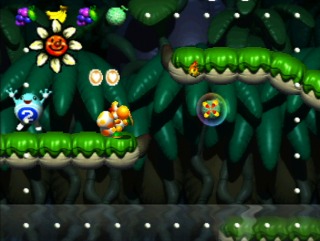 Each run through of the game is quite short, but there’s plenty of incentive to replay levels, as you’ll need to locate big sparkling hearts to unlock alternative paths through the game. All up there’s enough to see and do to sustain four or five playthroughs, so to see everything you’re going to have to be pretty good at hide-and-seek, and commit a couple of hours of solid play time.

And, while Yoshi’s Story isn’t a difficult game in the traditional sense, getting high scores is a worthwhile challenge. The goal of each stage is to eat fruit. Run through the level eating everything in sight and the level will be over very quickly. But the only way to get the high scores is to eat melons, and melons are often hidden quite well. Sniffing out every one of those for every level might be a self-set challenge, but it’s a worthwhile one as the game does keep high score leaderboards. There’s even some hidden Yoshis to unlock – what more incentive do you need to replay a game (though Yellow Yoshi will forever be the best)? 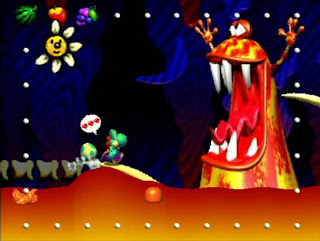 I think it’s often forgotten just how wonderful the level design in this game is as well. It’s one thing for the game to be bright and colourful, it’s quite another for it to be filled with genuine flights of creative fancy. In other words – as easy as the game is, every pixel of this game has been perfectly balanced to maintain a brisk pace of new ideas and environments to explore, complete with interesting enemies and the occasional puzzle. Melons are constantly, tantilisingly out of reach. Each level has four warp points to break up the momentum if one specific area has been cleaned out, or is becoming dull. Yoshi has a small range of abilities, but they need to be applied in a wide range of interesting and creative ways.

In many ways, the Wii’s Kirby Epic Yarn is destined for the same role in history as Yoshi’s Story: too many people have too much trouble looking past the game’s ease to truly appreciate the artistry and care that has gone into making a game that is fun to play.

Pity. Because there are just not enough games out there built for the pure purpose of making people smile.