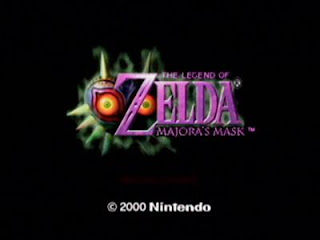 How do you create a follow-up to one of the greater successes of the video game industry? If The Legend of Zelda: Majora’s Mask is any indication, you reuse much of the same assets and launch it less than two years after its predecessor. Here’s the kicker: you reimagine everything else.

The tale of Majora’s Mask kicks off right where fellow N64 game Ocarina of Time ended. Ganon has been slain and the princess is saved, but the heroic Link yearns for a companion he parted ways with when he returned to his childhood. He heads out on his noble steed in search of her, but is soon assaulted by a forest-dweller wearing a strange mask. Robbed of his possessions, Link pursues the menace.
In just five minutes after the game begins, you’ll find yourself reduced from legendary hero to puny Deku Scrub. On top of being lost in an unfamiliar world, the townsfolk aren’t exactly welcoming of your Deku self. You’ll find yourself attacked by dogs, discriminated against, unable to leave town, and faced with apprehending a demigod within three days. That’s hardly the way your typical Zelda game begins.
In fact, beyond the series’ staple gameplay mechanics, Majora’s Mask is undoubtedly the most eccentric game in the franchise. Once you regain your humanity, you’re still not equipped to defeat the masked Skull Kid, nor do you have the time. Instead, you’ll have to manipulate time itself to save the foreign world of Termina. Whenever you play the Song of Time on your instrument, you’ll return to the first day of the game. Doing so erases memories of your encounters with the locals as well as any rupees you had or dungeon progress you made. Most of your major items are time-proof, though, including a notebook that keeps track of side-quests you’ve completed. 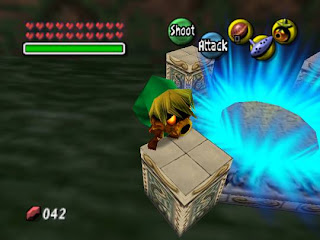 Even with all the time in the world, you can’t afford to fool around. Many events, including the daily routines of the folks in Clock Town, are dictated by the game’s timer. Your three day cycles often revolve around fulfilling objectives at certain times and many of the tasks that span multiple days will not reward you for dawdling.
Thankfully, the game is designed in such a way that the time travelling comes off as more organic than just another Zelda gimmick. Each and every aspect was considered thoroughly so that the detriments of a time limit could be avoided while still presenting intricacies to the player. For example, one mini-dungeon has a rather long sequence to truly “enter” it, but after obtaining the item inside, you can resume your progress in a different timeline by utilising its functions.
Link still totes his usual arsenal of tools and weaponry with him, but more often than not, the items collect dust. This time, collectable masks hog the spotlight. By donning a disguise, Link can run faster, lead animals, communicate with the dead, check the mail, become unnoticeable, or even transform into a wholly new body.
That last skill is surely the most significant, since you’ll ultimately find yourself with the power to swap between Goron, Deku, Zora, and human bodies. These forms boast specific abilities and allow you to venture deeper into the game’s world. Zora Link can swim the oceans and attack with boomerangs, Goron Link can steamroll enemies with his spikes, and Deku Link…uh, spits bubbles and glides with flowers. It’s also fascinating to see how the citizens react to each one of your forms. For example, shop owners will give you discounts based on your coolness or certain residents might shun you. The can be said for the regular masks, which elicit a variety of commentary from NPCs. 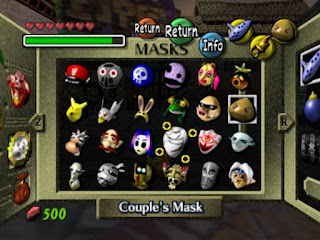 Dungeons are still present, but they’re nowhere as imperative as in other Zelda games. In fact, there are only four “real” ones, compared to the standard 7-10. If you’ve never played the series before, these are essentially enclosed areas that require you to solve overarching puzzles that mandate the use of items and masks. Each one rewards you with a new item (or mask) that can be used against the dungeon boss. Once you’ve laid waste to the beast, the area surrounding the temple will return to its natural state.
Majora’s Mask takes things further by hiding 15 fairies within each temple. If you can collect them all, they can be redeemed for a potent item or physical power increase. Polishing off each dungeon within the three day limit should be a cinch, but the fairies can be placed in perplexing locations. Do you risk losing all your progress in a dungeon to get a power increase or protect your dungeon progress and lose the fairies to time? Though rare, it’s the moments of uncertainty and intensity make the time system in Majora’s Mask feel all the more compelling.
It’s not just the differences that make Majora’s Mask stand out. Rather, the entire game world is full of memorable characters and bizarre moments. By participating in all the side-quests littered throughout Clock Town and the more resort locales, you’ll begin to develop a sense of familiarity with the fleshed-out characters and their routines. Little by little, the back-stories of the world are revealed. For a mere side journey, this seems meatier than most other entries in the series as far as plot is concerned. Its slightly darker tone also allows for an unfamiliar experience without belittling the value of charm and merriment. The disgruntled moon staring you down from the sky serves as a steady reminder of what’s at stake, though. 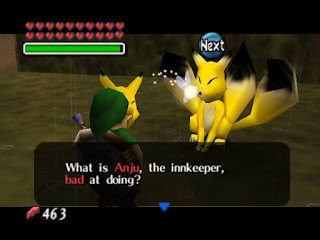 While tactical players could finish the game in less than 15 hours, Majora’s Mask offers far more in terms of content. Besides, the purpose here is to participate in side-quests and explore the world – rushing through the game is counterintuitive. Majora boasts 52 heart pieces to collect, 60 stray fairies, 24 masks, countless mini-games, hidden items, bonus dungeons, and item upgrades. In simpler terms, that means there’s never a loss for things to do. You could easily clock in (heh) at 50 or more hours if you’re trying to collect everything.
The only aspect that has aged less than elegantly is the visual design. Some character designs come off as creepy for all the wrong (jagged) reasons and many textures look a tad blurry. There’s also the rare framerate drop, which may be more a result of the emulation. Still, the world manages to be colourful, rich, and endearing in spite of this – chalk one up for good aesthetics, folks. This is still easily one of the best looking Nintendo 64 games. The soundtrack isn’t too shabby either, though fans of Ocarina of Time might feel deprived of a fresher score since several tracks are recycled from Ocarina of Time.
Majora’s Mask may well be game design at its finest. It should simultaneously please newcomers to the genre and longtime Zelda fans wanting something more to sink their teeth into. You may also dump 50 hours or more into exploring the world of Termina – not too shabby for a $10 USD download. Mandatory for any action-adventure lover.
-Clark A