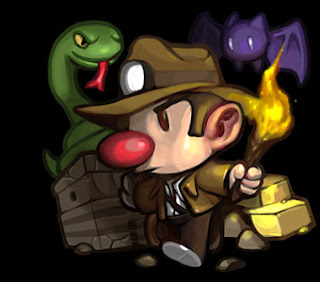 As I’ve already mentioned, I hate Spelunky. But it’s a great game. Don’t take my distaste for the soul-crushing difficulty as anything other than personal opinion – this is a really well made game and most people are going to like this one.

Part of the appeal of the game has to do with the presentation. It’s bright and colourful; thoroughly pleasant on the eyes. There’s a range of different little dungeon delvers you can select between, and each manages to have its own personality with minimal animation and absolutely no dialogue or other such characterisation. Enemies, too, are the bouncy, happy kind – even when you want to scream at the 1-millionth spider death.

That’s just one part of the appeal, though. Another comes from the randomised levels that promise essentially infinite replayability. Though the basic idea of each level is to grab a whole heap of loot and make it to the exit before the hazards and enemies get the better of you, that idea never manages to get boring because the experience is so different each time you play. 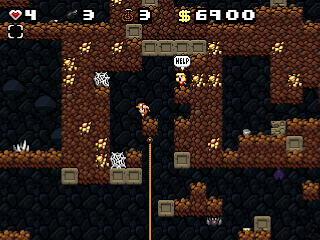 You’ll be playing each level a lot, too, because just like the Rogue-like games that Spelunky borrows so heavily from philosophically, a death is often quick and resets you back to the very start of the game. Because the traps and monsters are randomised a lot of the time death will feel unfair – with no patterns to memorise there seems like there’s always something that will come out of nowhere to surprise your fragile glass cannon hero.

With repeated re-tries it becomes possible to recognise the dangers around the hero, and a kind of fluid, reactionary pattern memorisation comes into play. It makes it possible to get further into the dungeon, but at the same time, Spelunky is genuinely unfair at times. There are things that are almost impossible to avoid in some levels, and when they cause the inevitable death, having to restart from the very beginning of the game is frustrating, to say the least.

Some people get a kick out of this kind of old-school difficulty, and I can appreciate that – I personally love the kinds of grind-heavy RPGs that were artificially hard through difficulty spikes. At the same time I don’t pretend that we haven’t moved on from that kind of difficulty – now we have games like Demon’s Souls which is challenging, but that was achieved through clever design, not arbitrary challenge spikes. Powerful monsters that needed to be defeated by clever use of the combat system and level design that needed to be exploited, rather than charged into head-first. This is the kind of difficulty I can get into. 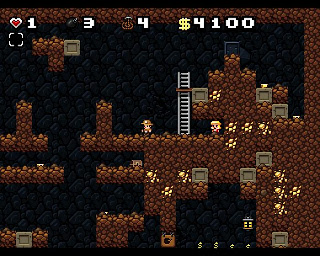 I see Spelunky in a similar light to those grind-heavy RPG retro homages that are on download services everywhere these days. Yes, these games are all authentic to the difficulty of their inspiration, but that authenticity is through carefully re-creating those bad (or limited) design elements that made those games far harder than they needed to be. I really would have preferred Spelunky to be difficult without resorting to minimal health, barely-visible hard-to-avoid traps, and a time limit that sends a vengeful ghost after you if you dare to play carefully.

But that’s just me. I like retro RPGs still, and plenty of other gamers our there are going to love this game. Just go in prepared for something that could become very frustrating.