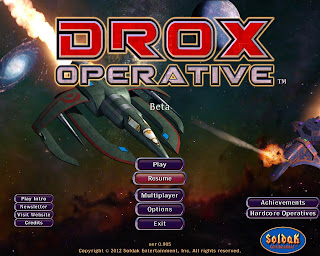 Sitting down to write this preview, I cannot clearly pigeonhole Drox Operative into a single genre or category. I can call the game a 2D, free-roam space shooter, but it is much more than that. I can say that the game is a real-time strategy game, but all of the necessary elements to categorize it as such are not there. I could attempt to sell the game as a galactic relationship simulator, but it does not involve high-schools or attempting to romance alien beings through witty dialogue options. Drox Operative borrows many concepts and blends them together to create something hard to label.

The core gameplay of Drox Operative is that of a stats-infused, free-roaming 2D space shooter. A substantial amount of time will be spent blasting enemies, increasing various attributes, and buying better equipment in randomly-generated galaxies. This aspect of the gameplay is entertaining. While not exactly standing out as being expertly executed or amazingly enjoyable, the mechanics work fine and they provide an above-average experience (bar for a few quirks which will be discussed). However, it is easily arguable that the core gameplay is only half of the sum of Drox Operative. 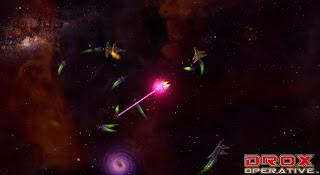 The notable and attention-grasping aspect of Drox Operative is its world (you mean universe, right?.. ed). Several factions (which are more-or-less the races of the game) will immediately start reacting to their surroundings upon the player creating a new galaxy; they will seek resources, increase their levels, and die off without player interference. Being witness to it, I can tell you that is 100 per cent true; unlike big-budget, open-world games where most of the dynamic-changing events are scripted, Drox Operative can change the players role in a situation at any time due the AI being able to wage wars against each-other.

Let us talk about the players role for a bit; the player is a titular Drox operative. The history of the Drox operatives is fairly unimportant but does set up the dynamic for the player. A long time ago, a legion known as the Drox ruled over the entire galaxy. They achieved this feat by employing operatives who were highly skilled in espionage, warfare, or silent assassinations. A few eons go past until the Drox realize that their operatives could become real threats to their core group of decision-makers, at which point the Drox attempted to eliminate all of their operatives. The short story is that the Drox failed and were completely wiped out, leaving the Drox operatives to create their own secret society to train future guns-for-hire. 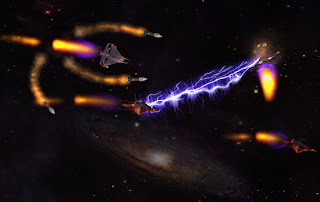 The back-story of the galaxy and the Drox operatives gives a solid justification for the quest system within the game. Assuming that any races you meet do not immediately consider you an enemy, the races will have jobs that you can accept, refuse, or ignore. These jobs range from killing a certain amount of enemies to buying gas grenades to stop riots on a specific planet. While giving the player more stuff to do besides floating around in a solar system and aimlessly looking for abandoned space junk, these quests are not varied. The problem is that most of the quests ended up in myself either dragging my ship to certain planets to buy certain items to be used on different planets or it ended up with me attempting to search an entire solar system for a specific ship to kill. Now, I am aware there are escort missions, but I could only find one and I failed that quest because I was not quick enough to start the quest. An addition that I find really motivating is that when a race asks something of you, you do have to factor in time; quests will end if the player is either too slow to complete it or if they decided to not even accept them. This element fits well into urgency that the AI-controlled races exhibit.

However, on the subject of that one escort mission, I should mention something; I had no idea what I was really doing. I will admit to part of this being that I had not read the entirety of the helping tips. At the same time, I cannot justify myself being the only reason as to not fully understanding the game when the game throws about two dozen walls of text within the first two minutes of playing. Right off the bat about three to four help tips popped up the second after my first galaxy was done being created. Despite what the games of the NES-era did, games like this should not be taught through the equivalent of in-game manuals. I’m annoyed about this because this game could appeal to more than just hardcore RPG fans that really like reactive worlds; the heart of the gameplay is that of a free-roam 2D space shooter, and by using that promise people could be reeled into a new experience that they may actually enjoy. But when your explanations are hard to sit through and almost frightening in a way, you cannot expect somebody to be reeled into the other aspects of the game before deciding to leave. As for a suggestion on how to fix this, I do recommend the developers of Drox Operative, Soldak Entertainment, to implement some sort of tutorial area that shows the player a short description of the most necessary action of gameplay (how to move), lets the player experiment with how to perform the action in the game, and then moves onto giving the player a short description of the second most necessary action to perform during gameplay 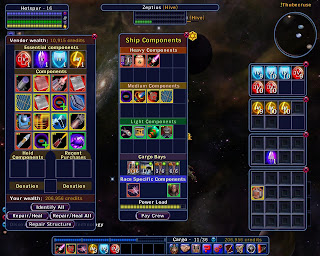 Moving on from that monster of a paragraph, I have yet to mention the relations aspect of Drox Operative. Each race has a specific relation to all Drox operatives within a galaxy (By the way, the game has multiplayer. This why I am replacing ‘You’ with ‘Drox operatives’ in this case). By doing quests for one race, Drox operatives can increase their relationship with that race. Increasing a relationship with a race is beneficial to Drox operatives, as it entails lower buying prices from that race’s planets, cheaper warp-gate usage prices, and greater chances that the race will agree to any peace treaties Drox operatives propose. However, selectively catering to one race will decrease the relationships of the races considered enemies to that singular race. If Drox operatives are very centered on doing the bidding of one race, the other races may end up declaring war on all Drox operatives because they happen to be the friends of the races’ enemies. Throw in options for espionage and propaganda into the mix and the game has a several different approaches as to completing the ultimate goal of siding with the race that takes over the universe. Should Drox operatives stick to one race and attempt to destroy other races through propaganda or should they drift to whoever happens to have the bigger wallet and spy on the races that trust the operatives enough to relax their security? It is an open-ended system that really tops off the entirety of the living world aspect of the game. 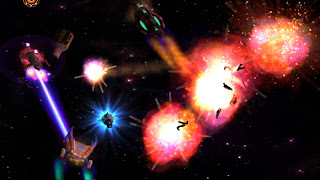 Something I feel that is not quite so open-ended is the galaxy creation system. During the few hours I played, the galaxy creation system was very linear. Only two solar systems would be connected to an individual solar system, and one of those two separate solar systems was most likely a solar system the player had already visited. To me, this problem slightly degrades the illusion of traveling through an entire procedurally-generated galaxy. It ends up making me think I am in a galaxy-themed dungeon rather than an enormously massive expanse of space.

In all I particularly enjoyed my time with Drox Operative. Although its core mechanics have been done better, they serve as an adequate platter for the main course of the evolving world the game exhibits. While there are a few issues I find in the game, the developer Soldak Entertainment have stated on the game’s official webpage that they will release the game when it is finished and not any sooner (an approach not unlike Valve Software’s). While I would be pleased as punch if the developer fixed the problems I had with the current beta, the least I can ask of them is to stick to their original vision and take my concerns into consideration.
Share this

Frequent Flyer Rewards falls under the sway of mighty Cthulhu