Holy Avatar vs Maidens of the Dead stars (natch) the Holy Avatar from GT2 and sees the adventurous character attempting to take a little vacation on his newly purchased private island- Holy Island. Coming with him is his bevy of gals- the Guild of Maidens (quite a holiday he was planning there).

Things go awry when the advanced group his holiness sent first are found dead when he makes his glorious arrival. Normally that’d kind of suck, but ol’ HA is secretly happy for a new quest and new baddies to beat. He’s a great guy, isn’t he? 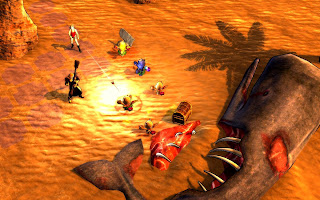 Among other things, the psudo-sequel promises brand new graphics with a cel-shaded look that’s way more colorful than past GT games and a new fixed (but still zoomable) camera system. Developer Silent Dreams will also be including a generous dose of “Caribbean flair” in the box as the game is being described as going pretty heavy on the Southern Sea atmosphere.

There’s no official release date yet, but you can expect Holy Avatar vs Maidens of the Dead this September on PC’s everywhere.