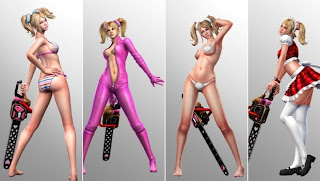 So, it’s been revealed that Lollipop Chainsaw is “only” four hours long. And, predictably there’s been Twitter chatter about how much of a “ripoff” it is for a 4-hour long game to cost $60.

I’ve already discussed this in a previous post, but $60 for a four hour game is not a problem. In fact, it could be a great deal.

On a purely numbers basis, that still works out to be cheaper than going to the cinema to see two (two-hour) movies. But let’s not get into that discussion again. Let’s talk about hour a four hour long game can be a really good idea.

There are a lot of games being released these days, and they’re often really, really good. They have deep multiplayer modes and hundreds of hours in content there. Or they’re big RPGs that last 50 hours per play through, while demanding multiple playthroughs for that platinum trophy.

I don’t know about you guys, but I don’t have the time to play all the games I’d like to as much as I’d like to. So, when a game looks to be a perfectly-formed, insane-but-brilliant piece of disposable entertainment (Lollipop Chainsaw), I sigh in relief. Here’s a game I can play to completion without taking me away from that desire to finally get around to replaying Nier.

And, if it really is that short, but that much fun, I’ll be more inclined to play it again – as a filler between bigger games or a way to pass a lazy weekend. Two or three play through and the raw hours blows out to 12+.

I would hope that gamers would realise that four really, really entertaining hours (and by all accounts, that’s Lollipop Chainsaw – entertaining) is better value than 50+ hours of unwavering boredom. Give me an intense game with no padding any time.

I’ll never understand why gaming is the only hobby where people refuse to spend proper money for the entertainment. You compare this hobby to any other one, and four hours of entertainment for $60 is a good deal, folks.