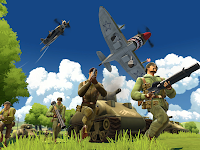 EA’s free to play online shooter Battlefield Heroes is turning three and players are getting some presents to celebrate.

Fans of the cartoony blast-a-thon can expect to see a few pretty cool additions go live including a new map (Fortress Frenzy), a bunch of new missions, and more ways to earn points.

The brand-new map, “Fortress Frenzy,” will have players fighting for victory on a small island, where the only way on or off is over six bridges located on each side of the isle. This will be an all-out war of bullets, explosives, powerful abilities, fire-proof underpants, magic and land vehicles for ultimate island control. Also part of this anniversary celebration, Battlefield Heroesis expanding their mission system with more opportunities to earn Valor Points and Experience Points as well as introducing the Treasure Chest to give players special rewards that appear at random upon killing an enemy.

In addition to that, any player who logs in between June 25th (that’s today) and July 1st will be on the receiving end of two free ‘party packs’.

Each Party Pack will include a Battlefield HeroesBirthday Shirt, a Tricycle Emote that lasts for 3-days and a new Treasure Chest Key. To claim their free Party Packs, players can log in at www.battlefieldheroes.comthen look in the “My Stuff” menu and select “Rewards.”

It’s a free to play game and there are free add-ons? Not bad EA, not bad.

Sink your teeth into Dawnguard tomorrow