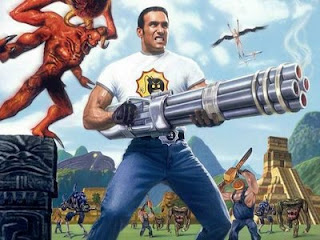 While Serious Sam: The First Encounter embodied almost everything fun about the purely twitch-based shooters of the 90s of PC gaming, Serious Sam: The Second Encounter was almost undeniably better. It was more crazy, more varied, and a bit more brutal. It’s also not hard to argue it may be the best game in the series, as Serious Sam II went overboard in its humor and Serious Sam 3 borrowed a handful of modern game designs that went against the otherwise classic gameplay. If anything, The Second Encounter is worth playing for any FPS fan that loves realism being thrown off of the roof of a 10-story building. On May 15th, many people will be able to experience more of that joyous disregard for reality and everybody else will be able to enjoy a good chunk of that original greatness.
Announced today on the official Digital Revolver website, a DLC pack for Serious Sam HD: The Second Encounter titled “Legend Of The Beast” is planned to be released on May 15th. This DLC will contain three new campaign missions, three new survival mode maps, and three new versus mode maps. No other information besides the above has been released by Devolver Digital or Croteam. However, the ever-snarky Fork Parker had something to say as to why the DLC exists; “Just the thought of all that extra cash is making me download some content into my pants,” he concludes, as continuing on with the rest of the statement would most certainly not make this post have a PG13 rating.
Looking further into the issue, it appears that Croteam has had this DLC planned since the beginning of the launch of the game. However, due to working on Serious Sam 3, the DLC had to get shelved and just now has been completed. The DLC is to be released on Steam at the price of $5 USD, which is not bad considering that other games are asking $15 USD for a small handful of multiplayer maps for a game that will be abandoned next year (yes, I’m pointing the finger at you, Call Of Duty).
Other than releasing the DLC on the 15th, the non-campaign multiplayer portion of the HD version of The Second Encounter will also be released on the same day for free. While technically only the modes ‘Capture the Flag’, ‘Deathmatch’, ‘Team Deathmatch’, ‘Instant Kill’, ‘Last Man Standing’, ‘My Burden’, ‘Survival’ and ‘Team Survival’ will be available to everybody,  last I checked those were all of the non-campaign multiplayer modes. While it’s true that I’ve always found the non-campaign multiplayer modes to be the weakest part of the Serious Sam games, their core is still quite enjoyable and this inevitable boost in players might reel me back in to play a couple of rounds with the renewed community.
Share this

Tecmo Koei is killing it in the market right now