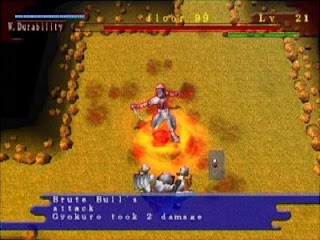 I’m a big fan of roguelike games. There’s something mesmerising about wandering through randomly-generated dungeons, focusing on nothing more than a simple but elegant combat system. There’s been a lot of good roguelikes through the years, and I suspect there will be many more to come.

That said, Eternal Quest is not a good one.

The game gets everything right on a basic level, so initially players might well be fooled into thinking they’re getting a good deal. The combat system is the right kind of simple for the genre featuring one piece of armour to worry about, one kind of weapon and levelling up simply means you do more damage. There’s no skill trees, no real magic, no alternative character classes. About the only thing that players need to worry about is a bar at the top left of the screen that represents a weapon’s durability. Eventually that will run out and the weapon will break. It’s a simple matter of equipping a new weapon then and continuing on.

And because the game is essentially turn-based (the hero takes a turn, then the enemies do), it’s hard to complain about the controls and the like. There’s no need for split second timing, or pixel perfect control of the action. The camera is scaled back enough to see what you’ll need to see, and there’s a minimap that is like every roguelike you would have ever played, and works fine. 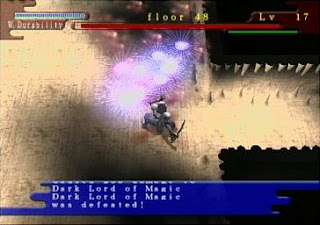 The problem with the game is its difficulty. Now, most roguelikes are hard games, and it’s precisely for that challenge that the niche group of gamers that are fans of the genre keep coming back for more. But in good roguelikes, the difficulty is fair. As the monsters get harder, if you play well and use your resources efficiently, you’re able to progress. With Eternal Quest there is a big, big problem; there’s a wide range of negative status effects that can be inflicted on the character and they can be crippling. Being burned wipes out your health in just a few turns, for instance. While the levels do have grasses around that can heal the negative effects, most grasses will only cure one effect. So there’s no guarantee that you’ll be able to access the right grass for the level – there’s no shops to buy the grasses you’re lacking, and the inventory is small, so carrying around enough grasses for every ailment is near-impossible.

The game isn’t even good enough to project what ailments you’ll be facing in the next level or two, so it’s impossible to forward plan unless you’re the kind of addict that memorises every single level in the game, die, and start again. Like most roguelikes, dying sends you all the way back to the start at level 1 and no inventory. 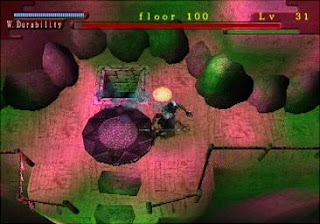 It doesn’t help that trudging through the many, many levels is a real chore on the senses. The soundtrack is up there with the worst I’ve ever heard, and the visual presentation is very amateur. Each new level brings with it a random setting for the corridors and tunnels. One level has a water theme, the next a lava theme. With nothing linking the levels together Eternal Quest becomes a very disconnected experience that is really difficult to engage with.

And to make matters worse there is only a handful (and I really do mean handful) of enemy monster types. When palette swapping gets this bad it’s hard to think that a game is anything but a lazy, rushed game designed to sucker people in to buying it with the promise of “unlimited levels,” and the like. Yes, like every roguelike the level design is randomised so technically there are unlimited levels, but thanks to the content stuck in those levels it barely feels like there’s enough to fill one level.

The Wii has a roguelike, Chocobo Dungeon, that ranks up with my very favourite games on the console. The 3DS has a fun little roguelike in Dragon Crystal. The PlayStation 3 doesn’t really have an example of this niche genre, but I would recommended popping over to the Japanese PSN, picking up a copy of the Chocobo Dungeon on its PSOne Classics, and playing them without having a clue what’s going on before bothering with this game. It’d be less annoying.