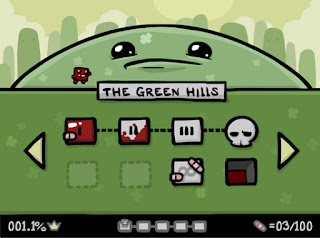 Team Meat’s Edmund McMillen revealed some new nuggets of info today regarding Super Meat Boy: The Game’s new iPhone game. Though still very early in development, he made it clear that this is intended to be a “game” through and through, with high difficulty and no easy way out.

The team’s goal is to create a game from the ground up with solid touch screen controls and no way to “buy” yourself out of a challenge.

The new screenshot on the left showcases the level select menu of the game. For those worried there aren’t enough levels for his grand vision, he elaborated further:

“Dont let the fact that there are only 8 level pads make you think that SMB:TG will be bite sized, its content will rival the original, but in very different ways… more on that later. (also yes there will be dark worlds!) “

Mr. McMillen also offered some of his thoughts on mobile gaming, such as the highlight below:

“To us the core of what is wrong with the mobile platform is the lack of respect for players, it really seems like a large number of these companies out there view their audience as dumb cattle who they round up, milk and then send them on their way feeling empty or at times violated… “

You can read more of Team Meat’s thoughts over at the game’s official site (beware of some NSFW language).
Share this