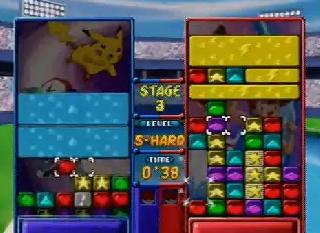 “I wanna be the very best, like no one ever was. To catch them is my real test, to train them is my cause.” Who can forget such moving, poetic lines from the Pokémon anime theme song? That pure emotion had to be the inspiration for Nintendo of America to localize Japan’s Panel de Pon puzzle game series under the banner of the popular Pokémon TV show.
Okay…maybe not. Either way, we somehow ended up with Pokémon Puzzle League (aka “the game based on a show based on a game featuring gameplay from an entirely different series”). It’s a surprisingly solid puzzler that fills in the void left by Tetris Attack’s absence on the Virtual Console.
Aside from featuring the Pokémon license in every aspect of the presentation, there’s really not a lot of “Pokémon” to the gameplay. This isn’t a criticism so much as a reminder the game originally wasn’t supposed to be feature the titular creatures, much less the anime.
The actual game is a fairly traditional “match three” puzzler. Various elemental blocks (water, electricity, etc.) rise from the bottom of the screen, gradually increasing the stack. Your job is to flip them around horizontally to match three appropriate elements together. Blocks with gaps between them can be flipped so that they fall downward, essentially giving you control (however limited) over the higher blocks. Another potential goal for you is to arrange the blocks so that one move causes a chain reaction that makes many more groups of blocks disappear. 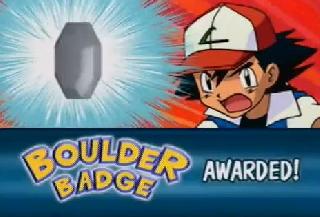 When facing another opponent in battle, you can “attack” by triggering combos. Your attacks put a line of unmovable blocks on the highest point of an opponent’s stack. They can only be cleared by having a combo come in contact with them, causing them to transform into normal elemental blocks. If you’re the impatient type and can’t wait for the screen to scroll upwards, you can hold down a button and the speed will increase. Should one of your blocks rise above the top of the screen, you lose the match.
The game has plenty of modes to hold your attention, including two different story plots. One such story follows the basic plot of the game series, putting you in control of Ash to collect gym badges to compete at the Pokémon League. With each victory, you’ll earn a gym badge in a similar fashion to the real games. You’re also able to select a Pokémon before the match, but the effect this has on gameplay is unnoticeable at best.
Marathon is pretty much what it sounds like; an endless mode that challenges you to build up a high score. Line Attack has you trying to lower the amount of rising blocks down to a certain point. Puzzle University forces you to think long and hard about your moves, since you only have a limited number. Practice mode and multiplayer speak for themselves (though multiplayer is quite a good time).
The most interesting one isn’t even a “mode” per se, but a mere option hidden away in a menu. Selecting “3D” transforms the playing field into a cylindrical shape and enables all sorts of new tactics not available in the traditional game. Several of the modes can also be played 3D, so you’ll be able to inject new life into the modes you’ve beat countless times in two dimensions. 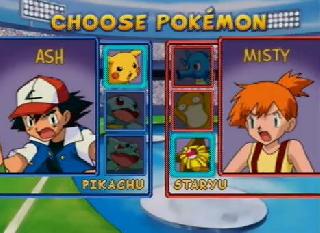 All of the character art comes from the anime. You’ll see plenty of character portraits and such that match perfectly with the source material. Interestingly, some full motion video cutscenes actually made it into a Nintendo 64 game. Considering the limited space on cartridges, this is especially impressive.
The majority of the game’s music and sound comes from (you guessed it) the anime series. Hardcore fans might even recognize some tracks from one of the Pokémon movies. It’s worth noting that the Virtual Console release has not altered voices to coincide with the shift from 4Kids to Pokémon USA. You’ll be able to hear all the voices you would have heard back in the day. One might find the character voices to be a bit grating during battle, however, since many of the same phrases are constantly regurgitated whenever you line up a combo.
Regardless of what you think about the source material or the prospect of playing another “match three” puzzler, Pokémon Puzzle League does a good job of making you feel engrossed. The extra modes are actually compelling and the 3D option turns your understanding on its head. Some may feel it’s a tad expensive compared to other puzzle games on the Virtual Console, but you get what you pay for.
-Clark A