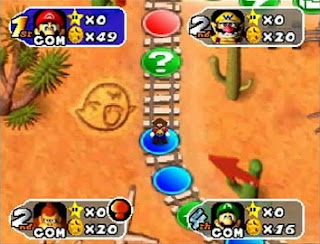 Mario Party is still alive and kicking after nine main entries and a handful of offshoots. Regrettably, it’s now accompanied by increasingly vocal disappointment. Many feel the mini-game quality has degenerated and that the gameplay has become far too focused on chance rather than ability. For those who feel this way, Mario Party 2 might be your best shot. Sure, luck is as present as ever (most irksomely in the single player), but its role is downplayed in multiplayer and most of the mini-games are high-quality.

To those not in the know, Mario Party is an inventive blend of several small games with a larger board game as the focus. Characters move around the board by rolling a die and picking a direction to move if prompted. Your goal is to collect the most stars, which is done by gaining coins (the game’s currency) and buying them from a random location. A star goes for 20 coins a pop, which isn’t cheap, so how do you go about getting more of that precious currency? Nearly every space you land on rewards you with three coins, but winning a mini-game will reward you with 10. Mini-games pop up every turn, so you have optimal opportunity to build a stash of coins if you can master the games.
To add some spice, there are several events and board-specific happenings. For example, landing on a battle space forces everyone to deposit a certain amount of coins into a bet, where the winner takes most of the total. Another space causes Bowser to come wreak havoc on the players. If you’ve got the cash, you can head to a shop on the map and buy an item. One particularly handy tool is the magic lamp, which immediately takes the user to the space with a star. 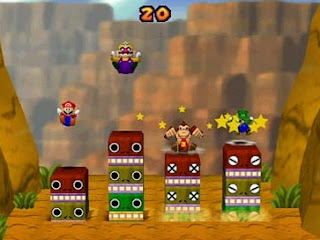 The actual mini-games are divided into various categories, such as free for all, 1 vs 2, and 3 vs 1. Each game has its own set of instructions that need to be learned before you jump into the action (it’s no Wario Ware learning curve). Fortuitously, you can choose to practice a mini-game before jumping into the real thing, which is very useful for multiplayer sessions with newcomers. On average, these games should take about thirty seconds.
With so many variables to take into account, Mario Party 2 throws a lot of luck into the equation of who takes the crown at the end. However, much more skill is required than the latter chance-heavy instalments. It’s a mostly comfortable balance, which is refreshing in the era of the “everyone must be on the same playing field” approach. You can choose to turn off the bonus stars (stars awarded to the person who did the most of a certain thing during the game), which often makes things unpredictable at the end.
In terms of content, Mario Party 2 remains a tremendous value even after all these years. For 1000 Wii Points, you get six different game boards and a solid 65 mini-games. Granted, some of them are rehashed from the first game, but objectives and controls have been altered for a less blister-inducing experience. Additionally, not every mini-game is A-grade material, but the vast majority are both pleasant and accessible.
As you might have guessed based on the title alone, Mario Party 2 truly lends itself to a multiplayer “party” environment. The more pals you can rack up, the more enjoyment you’ll get from playing the same games repeatedly. 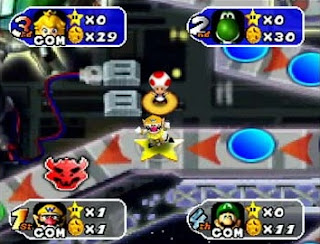 While multiplayer offers the true experience, you can still take the single player game for a spin. It’s just a shame that the computer’s intelligence seems rigged to ensure your demise in an otherwise fair game. You’ll spend a while trying to complete your mini-game collection so you can play them all at your own discretion when your mates come to your flat.
Graphically, the game is beginning to show its age. Character models look noticeably worse than other Nintendo 64 games starring Mario and the gang. Fortunately though, the game boards and environments are solid enough to make you forget about their somewhat shoddy presentations. One nifty feature is that characters wear a different costume depending on what board you’re playing on (i.e. Yoshi will be a pirate in Pirate Land).The soundtrack is as good as ever and should ensure a smile stays on your face.
Other Mario Party games may hit the Virtual Console, but number two belongs in your collection regardless. The variety of mini-games offered is immaculate, head and shoulders above several other entries. It could be a tough sell for the lone wolves of the world, but perhaps it’s worth the gamble.
-Clark A